Star Trek: The Next Generation: "Redemption" 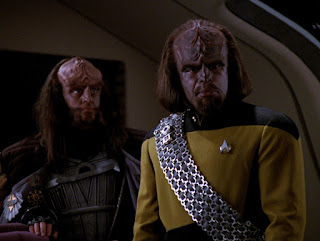 The Enterprise heads to the Klingon homeworld so that Picard (Patrick Stewart) may fulfil his duties as the Arbiter of Succession and appoint a new Chancellor to the Klingon High Council. When the sisters of Duras reveal he had a son, who lays claim to the Chancellorship, the Empire slides perilously close to civil war - and Worf (Michael Dorn) may finally have the chance to have his discommendation eliminated.

Two seasons of slow-building political intrigue comes to a head in "Redemption". Since Season 3 we have watched the Klingons march inexorably closer to civil war, and the Romulans drive the conflict from behind the scenes. The conflict between Worf and the Duras family has developed and intensified, and Worf's choice to accept discommendation rather than reveal Duras' father's treachery has weighed heavily on him through many episodes. Now it all ties up into a climax: the Duras family, the new Chancellor Gowron (Robert O'Reilly), Picard's discomfort at being so closely involved in Klingon affairs of state, the Romulan plot, and Worf's choice between life as a Starfleet officer or a Klingon warrior - it all clashes together here. This is a sensational end to the season.

The episode works because the back story has been so finely developed in advance. We don't need an introduction to the characters or the situation because we've already seen it approach. In broad respects this is the climax of a trilogy that commenced in Season 3's "Sins of the Father", developed in Season 4's "Reunion", and now reaches its peak here. All of that prior work pays off remarkable dividends: the episode doesn't need to stop.

In many respects it is a similar season finale to "The Best of Both Worlds". That episode had William Riker (Jonathan Frakes) struggle over whether to remain on the Enterprise where he was happy and comfortable, or accept a commission to captain his own ship. Here it's Worf who has to make the choice: continue as a Starfleet officer and leave Klingon politics to the Empire, or resign from his commission and fight for Gowron in the civil war. Intriguingly Worf makes the opposite decision to Riker, laying down his communicator pin and leaving Starfleet altogether.

Michael Dorn gives a strong performance here - indeed most of the Klingon performers excel themselves. There is always a risk with Next Generation-era Klingons that they will descend into angry shouting at a moment's notice. Here the performers give their characters layers and changing tones, and Ronald D. Moore's exceptional script gives them all much-valued depth. The highlight among the guest cast are the Duras' two sisters Lursa and B'Etor (Barbara March and Gwynyth Walsh respectively). They insinuate, sneer, mock and seduce, constantly working the room to get what they want - which is their easily pliable young nephew in control of the Empire. It is no surprise that the Duras sisters return - they're probably the best new characters of the season.

The episode also uses Picard wisely. He has stood alongside Worf throughout this entire story arc: standing beside him when he was discommended by the Council, serving as Arbiter when asked by the last Chancellor K'mpec, and regularly forcing Worf to ignore his disgrace and serve properly as an officer in between. It is right that he remains a supporting presence to Worf here as well. Not only does he finish his role as Arbiter, he forces Worf to make a choice between Starfleet and the Empire and admirably supports that decision when it is made. There is a wonderfully paternal tone to how Picard supports Worf in this episode: part commanding officer, part friend, but mostly a wise stand-in father. Patrick Stewart performs it beautifully - the episode's finest scene is probably the one between Picard and the Duras sisters, filled with false politeness and veiled threats. All three actors do a great job.

If all of that was not enough, a last-minute reveal shows off the Romulan commander in charge of the entire plot to seat the son of Duras at the head of the council. It appears to be former Enterprise security officer Tasha Yar (Denise Crosby) - except we the audience know that she is dead. How can she possibly be alive, or living as a Romulan? It's a great hook to keep the audience guessing until "Redemption II" arrives.

Another great episodes brings the final Season 4 tally up to 19 good episodes out of 26. Season 4 closes up with a quality ratio of 73 per cent - the highest score so far for a season of The Next Generation.
Posted by Grant at 6:42 PM