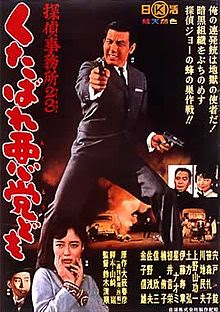 In the 1950s and 1960s the Japanese film studio Nikkatsu managed to find itself a profitable niche with a string of pulp action flicks, boasting energetic jazz scores, police and private detectives, yakuza and other mobsters, and a lot of shootouts, punch-ups and chases. Rather than spend money hiring movie stars, Nikkatsu made stars of their own contract players. Their films form one of the more interesting parts of Japanese film history, and thanks to a number of American and British DVD distributors they are finally getting the international exposure and recognition that they deserve.

Among Nikkatsu's directors, the one most widely celebrate today is Seijun Suzuki. He was ultimately fired from the studio after his artful and surreal thriller Branded to Kill upset studio management, and after he sued for wrongful dismissal he found himself blacklisted from the industry for about a decade, Thankfully he was still alive when his works were re-evaluated and widely celebrated, and today a string of his films are noted as genre classics: not just Branded to Kill but A Tattooed Life, Tokyo Drifter, Youth of the Beast and several others.

Detective Bureau 2-3: Go to Hell Bastards! is not one of Suzuki's better-known films for Nikkatsu, but it remains an impressively energetic, morally ambiguous and enormously stylish crime-based thriller. It's simply tremendous fun.

Joe Shishido plays Tajima, a private detective who makes a living by blackmailing philandering husbands and celebrities. Looking for a step up, he ingratiates himself into the police investigation of two rival yakuza groups. From there he infiltrates one of the gangs, and is forced to constantly keep himself one step ahead of the suspicious gang leader. In the end it is all really an excuse for a bunch of action scenes and shootouts. It's a fast-paced movie, running to just under 90 minutes, and it keeps throwing things at the audience in a furious attempt to ensure no one is left bored.

Shishido is an immediately ludicrous and simultaneously wonderful leading man. When his career did not pick up the way he hoped it would he underwent cosmetic surgery to fill out his cheeks and hopefully make him look like a more masculine and dashing lead actor. The result is that he tends to look a bit like an enthusiastic hamster, but to his credit it's a look he worked to the hilt. He makes for a very charismatic - if slightly unusual - movie star. In one scene of Detective Bureau 2-3 he even performs a musical number.

That's the beautiful thing about Seijun Suzuki's direction: when presented with the opportunity to throw a song and dance routine into a violent crime movie he does not hesitate. By Suzuki's standards this is a comparatively normal and conservative film - his later works get considerably weirder. The film looks outstanding, shot in bright colours and in the then-popular Cinemascope ratio. The colours in particular do not aim for realism. In one scene Tajima takes a mob informant back to his girlfriend's apartment. It is all lit entirely in shades of red and yellow. It looks weird as a hell, but also weirdly cool.

Perhaps the film's most striking element is its wonderful jazz score, composed by Harumi Ibe. Jazz was brought to Japan wholesale in the early 1950s, thanks to the American soldiers stationed there, and it came to occupy the same place in Japanese pop culture as rock'n'roll occupied in the USA: youth, rebellion, sex and drugs, and so on. It fits this film perfectly, giving the entire piece a driving rhythm.

This is just a really fun film, pure and simple. It's great to see these more obscure Nikkatsu hits get the international exposure they deserve.