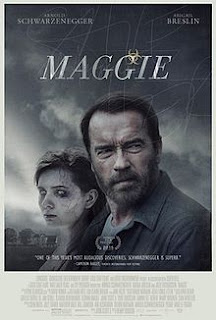 In the aftermath of a nation-wide zombie outbreak, farmer Wade Vogel (Arnold Schwarzenegger) returns home with his daughter Maggie (Abigail Breslin). She has been bitten and infected, and will inevitably transform. Within weeks she will be transferred to a quarantine zone, giving father and daughter scant time to say goodbye and come to terms with what is about to occur.

Maggie is a peculiar zombie film. Coming at what we can only assume is the end of a decade-long spate of zombie narratives, it abandons horror and action in favour of personal drama. This is a quiet, gentle apocalypse, told not within panicky escapes from hordes of the undead but with melancholic introspection and a sense of the inevitable. The film is also peculiar because its star, Arnold Schwarzenegger, is not particularly known for small-scale family tragedy. The last time he dealt with a supernatural end of the world we got End of Days. Maggie is a significantly different sort of movie. It is far from faultless, but at the very least it is a fascinating attempt to do something new with a very worn horror trope.

When the film works well, it does so brilliantly. There is an odd banality to this post-zombie world. People embrace and cry with the infected. Families are given time to make their goodbyes. The government has taken back control and has put a series of laws and procedures in place to keep the pandemic from spreading any further. In the film's best scenes Maggie reconnects with her schoolmates and shares a tentative, knowingly futile romance with another infected teenager. There is little in the way of horror here. At best there's a growing unease, as Maggie's symptoms advance and her father and step-mother (Joely Richardson) become increasingly wary that she is about to transition into a monster.

Sadly this realistic take on the zombie genre comes at a price: Maggie is a remarkably slow-paced film, so much so that from time to time it does tend to drag. There are few surprises to be found in the movie - its inevitability is a core part of the story. At least 10 minutes could have been cut out without too much difficulty. It is not enough to ruin the movie, but it is certainly enough to drop it back from being a great film to merely being a fascinating one: worth watching, but probably only once.

Abigail Breslin does an excellent job as Maggie, portraying a very realistic growing panic as she sees the end approaching. Arnold Schwarzenegger is great. He remains a fairly limited actor, but since coming out of retirement he has made a lot more interesting choices of roles, and is pretty much doing the strongest work of his career. Maggie is another film he can chalk up in a growing list of good performances. Audiences may not be buying into this second phase Schwarzenegger, but for those willing to give him the chance he's more than delivering the goods.

In the end Maggie offers mixed results. If you can appreciate the languid pacing and the slow, unsurprising narrative, it does have a lot to recommend. In a hopelessly over-crowded genre, it actually has something fresh and engaging to say.
Posted by Grant at 10:19 PM