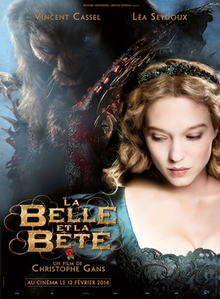 Generally speaking I begin a film review by summarising the film's premise and basic plot. In the case of Christophe Gans' 2014 film Beauty and the Beast it hardly seems necessary. Even if you did not read or get told the fairy tale when a child, it is likely you have seen some sort of adaptation of the story before - notably Disney's popular animated adaptation. Suffice to say that while the smaller details of the film have been invented for Gans' adaptation, this is in broad strokes a very faithful and straightforward translation of de Villeneuve's story to the big screen.

When taking such a well-known storyline and turning it into a film, a director essentially has two choices: find a new angle from which to attack the story, and make the film a distinctive and fresh interpretation, or tackle the story head-on, presenting a traditional take and focus on simply making it the best-looking and most effective adaptation possible. With Beauty and the Beast Gans goes for the second option, and partially succeeds. While one could quibble over the predictable plot and the fairly simplistic characters, there's no questioning that this is a beautiful film in terms of production design, costuming and visual effects.

Existing fans of Christophe Gans will not be surprised: visually stunning mise-en-scene is essentially his directorial trademark. Earlier films such as Brotherhood of the Wolf and Silent Hill have showcased an impressive talent for beautiful imagery. Beauty and the Beast is no different. The film makes extensive use of computer-generated effects to create its fairy tale world of enormous, crumbling castles and bleak, snowy forests. Gans makes great use of technology in creating his Beast, who is played by noted actor Vincent Cassel. The character's physique enables him to leap and run like an animal, but his face is humanoid enough to allow for proper emotion and expression. I would usually be a little wary of a film that uses so much CGI to create its setting, but here it all such as a consistent and painterly look that it works extremely well. An action climax dominated by writhing vines and giant animated statues is very well put together.

Léa Seydoux co-stars as Belle, and thankfully the screenplay enables her to play the part with a great deal of inner strength and agency. Seydoux's performance matches the script, making her a very likeable and engaging protagonist.

The supporting cast, particularly Belle's family, are performed very broadly - particularly Audrey Lamy and Sara Giradeau as Belle's constantly flustered and vain older sisters. Eduardo Noriega plays the villainous Perducas, the gang leader of whom Belle's brother Maxime has fallen foul. I have enjoyed Noriega in a number of other films, but here he seems to struggle with an underwritten role. He is the film's villain, but to an extent he's a villain in a film that doesn't particularly need one.

Myriam Charleins plays Astrid, Perducas' fortune-telling girlfriend. She makes a striking impression, partly because of her distinctive looks and demeanour but also because her character's motivations are quite difficult to pin down. She's clearly on Perducas' side, but she is constantly counselling him to stop being the villain. It makes her a slightly odd character: a villain's sidekick who spends much of her time telling him to stop being an antagonist. She adds a nice wrinkle to their scenes together, which would otherwise feel a little unnecessary.

Approach Beauty and the Beast in the hope of seeing something startling or original, and you will likely walk away disappointed. Approach it expecting a beautifully staged and rather sweet adaptation of a well-worn fairy tale and you're much more likely to have a good time.
Posted by Grant at 4:59 PM