Babylon 5: "Movements of Fire and Shadow" 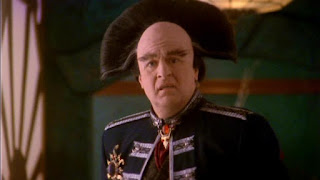 The Interstellar Alliance goes to war with the Centauri Republic, although some member planets may have more extreme plans than others. While Sheridan (Bruce Boxleitner) races with the White Star fleet to prevent catastrophe, Franklin (Richard Biggs) and Lyta (Patricia Tallman) uncover disturbing new revelations on the Drazi home world.

It seems as if the last episode of Babylon 5 finally lit a firecracker underneath the dwindling series. "Movements of Fire and Shadow" is a fast-paced , highly dramatic episode. The plot develops rapidly, the characters are pushed into moments of desperation, and enormous tragedy once again looms over all. I think it is easily the strongest episode of its season. That sounds like potentially weak praise giving the generally poor quality of Babylon 5's final year, but it really can stand up as one of the best episodes the series has produced.

The episode begins at an already-heightened level. The Alliance is not just at war with the Centauri. Enraged assailants are murdering random Centauri citizens on Babylon 5. Vir Cotto (Stephen Furst) has been forced to move to secure accommodations. The Centauri fleet has started targeting jump gates, an unimaginable crime that will set back interstellar travel by decades if success. It begins desperate and bleak, and the episode sprints downhill from there.

The bombshell that's been lurking just off-screen for the last few episodes finally goes off: the Centauri vessels that have been destroying starships along the galaxy's borders - and which sparked the current war - have been empty, and piloted automatically using technology belonging to the Shadows. The Centauri Republic, which has been denying their participation in the attacks all along, have actually been telling the truth. Someone within their government has been conspiring to engineer the war, and it turns out that person is the Regent (Damian London) himself under the control of the Drakh. At the episode's climax Londo (Peter Jurasik) finally realises the sheer catastrophe his people are facing, but in classical tragic terms he finds out just a few moments to late to avert disaster: Centauri is about to be utterly decimated. The look of horror on his face is enormously powerful.

The discovery of what is actually going on comes too late for Sheridan as well, who simply doesn't have time to reach Centauri Prime before the enemy fleets do. His desperation is clear, not to mention his sheer panicked frustration that whatever he does everything is about to fall apart. It's a great episode for both Bruce Boxleitner and Peter Jurasik. It also provides great material for Damian London. He started as the Regent back in Season 4, playing him as a fairly comedic and pathetic character. Now that character has turned to simple tragedy, and he performs it in a quite heartbreaking fashion: a destroyed man forced to destroy his own people.

The secret of the Drakh-controlled Centauri warships is revealed by Franklin and Lyta. They're actually sent to the Drazi home world by Vir, because he is concerned that despite their destruction of several Centauri ships the Drazi have not recovered nor returned any Centauri bodies for burial. It's pretty much by accident that they learn the reason for this absence: there are not any Centauri bodies there to return. Early scenes of this subplot feel a little generic and weak, until they are ambushed - apparently in the same hotel room as Garibaldi (Jerry Doyle) a few episodes back - and Lyta uses her telepathic powers to force a Drazi to shoot himself in the head. That's incredibly bleak, and quite frightening. Combine that with Lyta's newly-found hard core mercenary attitude - no help without significant financial payment - and it makes the character an increasingly unlikeable person to be around. I'll be interested to find out if there is a conclusion to Lyta's arc by the series' end or if this is simply her post-Byron personality going through to the end.

This episode does exactly what it needs to do: rocket along, dropping plot bombshells and landing at a hugely terrifying cliffhanger. Will Centauri Prime avoid destruction? Will the Drakh be revealed? It's all up to whatever happens next episode. We're now 17 episodes into the season with nine good episodes: the quality ratio jumps back to 53 per cent.
Posted by Grant at 5:01 PM