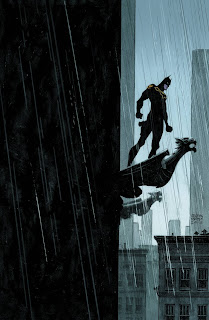 For the last six months or so Detective Comics has felt like a pretty uneven and inconsistent book. The eagerly anticipated run by Brian Buccellatto and Francis Manapul seemed to collapse after just one storyline, and got replaced by a mixture of Peter J. Tomasi one-shots and random crossover tie-ins. There didn't seem to be consistency any more, and it was making the book rather difficult to properly enjoy.

I am hoping those troubled days are behind the book, because this latest issue - #48 - begins a very promising new story arc. A man is found dead in an alleyway dressed like George Washington, with a frightening level of detail right down to the style of buttons on his coat. The murderer nearly kills Batman - still played by former police commissioner Jim Gordon - when he arrives to investigate. Now the chase is on to track down the killer and work out precisely what's motivating him to kill in the fashion he does.

It's an evocative and intriguing opening instalment, giving just enough material to hook the reader into the mystery. It's also aided by great art from Fernando Pasarin and Matt Ryan, and beautiful characterisation from Tomasi's script. I don't expect Gordon to remain in the Bat-suit for much longer, but when he's written like this I kind of wish he would stick around for longer. (4/5)

Under the cut: reviews of Batman and Robin Eternal, Doctor Strange and The Eighth Seal.

This series has really hit a strong patch, with beautiful character work and a killer flashback sequence. A case of Batman's dark secret turns out into a much more believable case of unreliable narrators with one of the best story twists I've seen in a few months. The budding friendship between Harper and Cassandra also gets a lot of development here. I have mentioned this in reviews of earlier issues, but I really want to see these guys teamed up for a regular comic book of their own. They're easily strong enough. Blanco and Robinson's artwork is great too, with some really nice and varied panel layouts. It's great stuff. (4/5)

We're four issues in and I am still not 100 per cent sold on this new volume of Doctor Strange. It boils down to two problems. The big one for me is Chris Bachalo's artwork, which seems insanely busy and difficult to follow down the page. It's that unreadable by any stretch, but it doesn't flow smoothly like a comic book layout should flow. This is probably exacerbated by the seven (count'em) inkers used to get this issue out on time. No wonder the art doesn't hold together across the issue. The second problem is the story, which features some unknown and powerful enemy killing all of the multiverse's sorcerers supreme. It feels a little too much like Jason Aaron's original run on The Mighty Thor, which was pretty much the same story only with someone killing gods instead. I adore Doctor Strange and I feel I should be loving this book, but I simply can't build up the enthusiasm for it. (2/5)

I was not entirely impressed with the first issue of The Eighth Seal, a new series that tries to blend horror and political drama. Not enough happened, and it generally felt a bit underwhelming. I did figure, however, that it was worth giving the book a second chance with the just-released second issue. While it does advance the story a little more, it still feels a little undercooked: the panel-per-page count is really low, which means there's really not a lot of story each issue to make it worth the purchase. Jeremy Rock's art is better this issue, but overall it still feels a little too weak. (2/5)
Posted by Grant at 8:17 AM