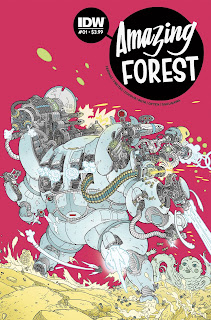 You don't get anthology comics very often. Image has been publishing Island in recent months, which has been a mixed but often-times excellent publication. Now IDW is adding to the tradition with Amazing Forest, a new series written by Erick Freitas and Ulises Farinas with a rotating group of different artists. This first issue features four separate stories.

"Tank", illustrated by Julian Dufour, focuses on a group of men stuck inside a massive rolling tank. Every day the toxic green sludge outside transforms into the shape of their loved ones, and every day they are forced to roll over or shoot the images of their families and friends to live for another day. It's an odd, dark little science fiction story, but all in all it's pretty effective. "Wolf Mother", illustrated by Matt Rota, is distinctively drawn and coloured, but the script feels too short and slight for the reader to make a proper connection. "Ronnie the Robot", featuring art by Melody Often, is also very short but manages to squeeze in some nice story beats and an emotional kick. "Bird Watcher", illustrated by Yumi Sakugawa, is the strangest story of the bunch. Sakugawa's simple artwork is a brilliant match to the non-realist, idiosyncratic story.

Altogether it is a great package, with great cover artwork, great ideas and wildly varied artwork. I really hope it finds an audience - it deserves one. (4/5)

Under the cut: reviews of Batman, Judge Dredd and Ms Marvel.

"Superheavy" stretches into its eighth issue. Mr Bloom has escaped custody, and taken a captive Jim Gordon with him. On the other side of the city Bruce Wayne struggles against the growing return of his memories. This is a dark, increasingly tense issue, with a situation that gets worse and worse each page. When the issue ends, it's with a cliffhanger that makes one simultaneously sad and ready to punch the air with excitement. It takes a rare talent to combine those emotions onto the same page. Once again Snyder, Capullo and Miki have delivered an absolutely outstanding comic. (5/5)

In addition to writing Amazing Forest think week Farinas and Freitas also have the second issue of their bold new take on Judge Dredd. In the style of Kamandi, Dredd has woken up in a far future where Megacity One is a long-forgotten memory and strange-spoken humans now forage among its ruins. It's a wonderfully strange world that they have created, and it's nicely illustrated with Dan McDaid's exaggerated, somewhat grotesque artwork. There have been a bunch of American Dredd comics and they have generally failed because they've simply offered what 2000 AD already had covered. This comic is offering something new, and it's an intriguing offering indeed. (4/5)

It's Ms Marvel versus Hydra for the fate of New Jersey. What I like about this issue in particular is how smoothly G. Willow Wilson's script has tied together Kamala's super-heroic crisis - stopping a villainous organisation from mind controlling the people - with her personal crisis - her best friend that she's finally fallen in love with is now dating another girl. It's this sort of clever conflation of superhero comic and teen drama that makes Ms Marvel work so well. It's also great to see a storyline wrap up in three issues - while epics like Batman's "Superheavy" have their place, it's sometimes nice to read something quick and breezy as well. (5/5)
Posted by Grant at 7:29 AM