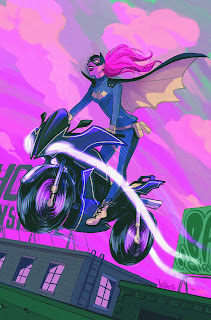 A while back DC editorial made the decision to unshackle their writers from cross-book continuity, with the idea that they would be enabled to just write the best possible stories that they could. The problem with this approach is that, as a shared universe, it actually does matter to an extent that what happens in one book is at least correctly reflected in another. Without a tighter rein on continuity you get a comic like this - Batgirl #47 - in which Bluebird appears in the story at an earlier point than her adventures in Batman and Robin Eternal, yet Jim Gordon references the events of Batman which occurs after Eternal. It would be fine if these inconsistencies just happened to be there, but dialogue and editorial footnotes actually direct the reader's attention to them. It's sloppy, and throws this particular reader out of the story.

It's a shame, because Batgirl is currently telling a pretty great story. It has been building in a solid and dramatic fashion for a few issues now, and this issue ends on a particularly ominous cliffhanger. I'm particularly enamoured with the book's growing supporting cast, which now includes both Bluebird and Spoiler; I desperately hope they get their own team-up book really soon.

The balance of light-hearted dialogue and action-based drama that the book has settled into is really working for it. It's just a damned pity about the continuity woes. (4/5)

Under the cut: reviews of Robin: Son of Batman, Silver Surfer and Usagi Yojimbo.

It's fill-in time: a temporary writer and temporary artist have leaped in to keep the book ticking over while Patrick Gleason gets ahead on issue #9. In this case it's Ray Fawkes and Ramon Bachs telling a done-in-one story about Robin, Nobody and Goliath returning yet another stolen artefact to its rightful owners. It's reasonably well presented, although an unnecessary framing device featuring Alfred smacks of filling space after the main story ran short. Actually unnecessary pretty much covers the issue. Is it bad? No. Can you freely skip it? Probably. (2/5)

It's a whole new volume of Silver Surfer that is, like Ms Marvel before it, pretty much exactly like the last volume of Silver Surfer. Same cast in the Surfer and his human companion Dawn. Same Doctor Who-inspired storylines and style. Same writer and artist. Same everything, just more of the same repackaged in the cynical hope of getting a sales boost. Thankfully it's all pretty great, with aliens robbing the Earth of their fiction and art, then taking the forms of some of the planet's most popular culture heroes to fight the Surfer and Dawn. Silly, but wonderfully enjoyable. (4/5)

Here's another neat one-shot from Stan Sakai: Usagi stumbles upon the site of a horrific massacre, rescuing its sole survivor - a young woman, a merchant's daughter on her way to be married in the next town. When a group of bandits arrive to finish the job, it's up to Usagi to protect her until she can be delivered to her future husband. This is a neatly deceptive issue, pushing in a very traditional, almost stereotypical fashion, right up to its climactic surprise. Sakai makes this sort of book look so easy. Usagi Yojimbo remains one of the very best comics on the market. (5/5)
Posted by Grant at 9:54 AM