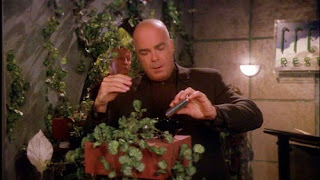 Sheridan (Bruce Boxleitner) learns of the mission Delenn (Mira Furlan) gave to Lennier (Bill Mumy). When he tries to recall Lennier's ship, Lennier takes matters into his own hands. Lise Hampton-Edgars (Denise Gentile) arrives on the station to surprise Garibaldi (Jerry Doyle), only to learn he has started drinking again.

"Darkness Ascending" proves that the previous episode, "Meditations on the Abyss", was a largely unnecessary episode to make, since it by-and-large continues the same general storylines in a slow and unsatisfying manner. Both episodes could easily have been squeezed into one, resulting in something that would at least be faster-paced. The other problems were would not so easily be fixed, since they indulge mercilessly in cliché and stereotype. It all adds up to a pretty dull watch.

Sheridan's anger at Delenn sending Lennier on a top-secret mission makes little sense. Lennier is a competent and intelligent officer, and demonstrates his worth by the episode's end: returning to the station with documented proof that the Centauri have been destroying cargo ships across the Interstellar Alliance. Sheridan's sudden order to recall Lennier's ship doesn't make any sense either. All it adds up to is a weak scene with half of an argument, Sheridan muttering "Damn it, Delenn" like he often does, and then meandering away to the conclusion.

Garibaldi's descent back into alcoholism is an excuse for pretty much every single story cliché about alcoholics one can imagine. It is incredibly painful to sit through, and reduces what should be a tragic character moment into a weak movie-of-the-week. This is one of those character arcs where you could see the end from the beginning and simply have to drum your fingers until the series finally catches up to where you were five episodes ago. It's really, really tedious. We even get one of those "secretly slipping booze into his coffee" moments, and that comes after the single-most unbelievable waiter ever in an expensive restaurant bullying Garibaldi into order a wine.

Londo and Vir start to grow suspicious that no other alien government wants to meet with them any more. You would think an intelligent man like Londo would add together the attacks on the cargo ships, the sudden and massive increase in his own government's military budget, and the mass suspicions that his people are to blame for the attacks, and start to get pro-active. Instead he seems weirdly unaware of the entire pot in which he's boiling. He doesn't even really work out what's going on when Delenn, caught between crying and laughing, hugs him in a corridor. He asks why she hugged him. She replies it's because she never has, and soon she will never have the chance. He still doesn't seem to twig. That, at least, is a nice scene.

Another good pair of scenes see Lyta (Patricia Tallman) visit G'Kar (Andreas Katsulas) to offer him the telepath DNA he demanded all the way back in the original Babylon 5 pilot, "The Gathering". It's in return for a lot of money, and some starships to help the rogue telepaths finally find their own homeworld. It's a nicely played little storyline, and is pretty much the best thing in this episode.

This is a maddening episode, because with the build towards an Alliance-Centauri war the series should be back on strong territory. It has demonstrated an ability to tell this kind of story well before. For some reason this time it's being done in the laziest and least effective manner possible. We are now 15 episodes into Season 5. Only seven have been good or better. That leaves the quality ratio down at 47 per cent.
Posted by Grant at 7:40 AM