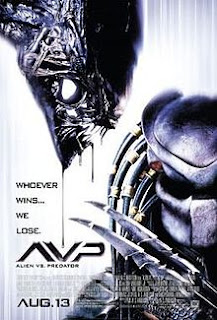 It is all Predator 2's fault. Back when that 1990 sequel was in production, a member of the design team mocked up the skull of an Alien from the 1979 Ridley Scott film and added it to a way of bizarre skulls inside the Predator's spaceship. It was intended as a small in-joke, a knowing reference for science fiction fans and film geeks to notice and have a little chuckle at it.

Or maybe it's the fault of Dark Horse Comics, who had the rights to publish comic books based on both Alien and Predator, and whose editor in chief noticed the Alien skull and based an entire comic miniseries around the idea of Aliens and Predators fighting: Alien vs Predator. Or even Activision, who promptly developed an Alien vs Predator videogame for the Super Nintendo console.

In the end, however, it is probably fair to lay the blame at the feet of 20th Century Fox, who green-lit the concept, developed it for several years and finally released an Alien vs Predator feature film in 2004 directed by Paul W.S. Anderson (Mortal Kombat, Resident Evil). It even had the world's most unaware tagline: whoever wins... we lose.

That's being unnecessarily harsh on the poor thing. The truth is what you get out of Alien vs Predator is going to depend precisely upon who bring to it yourself. Come in with expectations of a worthy successor to Alien or Aliens and you will walk away deeply disappointed. Come in looking for a decent follow-up to Predator and you will likely be less disappointed than the Alien fans but still fairly underwhelmed. If, on the other hand, you come looking for two iconic sci-fi/horror icons going at it like Godzilla and King Ghidorah at Wrestlemania, then Alien vs Predator is absolutely the movie for you.

If all you're after is a fast, gory action flick, then you are unlikely to care about the dreadful backstory to the film in which the Predators arrived on Earth thousands of years ago and taught the humans, Erich von Daniken style, to build the pyramids. You won't mind about the thinly drawn characters who exist solely to be hunted down and killed one by one, like a gang of teenagers in a Friday the 13th flick. You will be unlikely to be concerned that the film slavishly replicates details of both franchises while ignoring anything that's inconvenient - like how long it would take for an Alien breeding cycle to take place. All you need to know if you are that person is that some humans break into an underground pyramid in Antarctica, and some Aliens get released, and some Predators arrive to kill the Aliens, and there's a lot of urgent action involving dismemberment, stabbings, eatings, burst chests, shoulder-mounted laser cannons and running away from monsters.

Is it dumb as the proverbial bag of hammers? Absolutely, but it also has its eye trained very competently on what kind of movie it wants to be, and it achieves its modest goals flawlessly. It's a big, loud, stupid action film, and that is a sort of genre for which there will always be a healthy demand.

Sanaa Lathan is actually rather engaging as Alexa, the mountain guide hired to lead a team of archaeologists down the the pyramid. Raoul Bova does his best as Sebastian, one of the archaeologists being led, but he's working with a much less engaging character. A few of the other actors stand out - Ewen Bremner as a nervous Scottish scientist, or Lance Henriksen as a walking continuity reference - but all in all it's an unmemorable cast who exist purely to die in turn every five minutes or so.

The film is relatively well shot, with a few genuinely well-staged scenes of action. The visual effects are for the most part convincing, and the film moves along at a nice brisk pace. Yes it's stupid, and yes it's a terrible waste of some genuinely good intellectual property, but in the end it's actually rather fun. A few scenes are really good. The rest are bad enough that it's possible to enjoy them anyway.