Babylon 5: "In the Beginning" 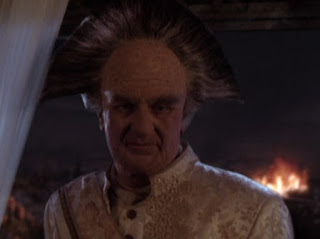 It's 4 January 1998, and time for a Babylon 5 made-for-television film: In the Beginning.

Picking up the rights to Babylon 5 for just one season must have been a difficult choice for TNT. Why spend the money making and promoting a new series for your channel only to end it after just 22 episodes? I strongly suspect this why TNT also moved forward with a series of TV movies. They could exploit higher production budgets, be packaged individually for home video release, and extend the property a little further than just the single season. It made a lot of financial sense. Had they been more successful there's a good chance that TNT could have made a lot more of them in subsequent years. Sadly this did not prove to be the case, and in the end they only produced four.

While it was the second TV movie to be shot, In the Beginning was the first to be aired. It premiered in January 1998, just before TNT's launch of the fifth season. It recounts the events of the Earth-Minbari War that dominated the back story of Babylon 5, and showed the participation of several of the series' key characters: Sheridan, Delenn, Franklin, Londo and G'Kar.

After a genuinely bizarre and unnecessary direct address sequence featuring Delenn (Mira Furlan) and G'Kar (Andreas Katsulas), the film immediately settles down to a much more interesting prologue: Centauri Prime, in 2278. The capital city burns, and two children in the imperial palace accidentally disturb their Emperor: Londo Mollari (Peter Jurasik). They seem to amuse him, or at least take his mind off his troubles, and so he agrees to tell them a story. He tells them about the Earth-Minbari War. From there the episode flashes back all the way to 2243 to recount the disastrous first contact between humans and the Minbari, the rapidly escalating war, secret negotiations to end it, and the pivotal "Battle of the Line" that did finally bring it to an abrupt and unexpected conclusion.

To its credit In the Beginning does generally feel a lot less like an extended episode and a lot more like a film. The narrative rushes through a prolonged period of time, showcasing key moments and turning points for the characters. While the attempts to make the characters all seem younger than they do in the series are a little shaky, they are generally convincing enough to work. Some of the meetings and encounters - such as Sheridan, Franklin and G'Kar teaming up for a secret peace negotiation - appear to contradict those characters' first meetings in the series, so it does get a little odd and contrived from time to time.

It is also a little frustrating. I cannot imagine how a viewer entirely new to Babylon 5 would fully comprehend what is going on, since it assumes an awful lot of prior knowledge by the audience. At the same time it does overlap a great deal with things the series has already presented: the Battle of the Line, the Minbari side of the war, and so on. Even the framing narrative, which is beautifully presented and quite emotionally effective, feels fairly redundant. While there is some pleasure in seeing links being made from one bit of backstory to another - an appearance by Kosh and his future replacement is particularly welcome - it does all feel like we have seen it before. It ultimately makes the film feel less like an entertaining story in its own right and more like a pleasant diversion; a small extra to enjoy after the series is complete.

In the end I enjoyed In the Beginning, but its structure and prequel status really do limit that enjoyment. It is ultimately interesting more than entertaining, and a rather non-essential part of the Babylon 5 saga.
Posted by Grant at 10:10 AM