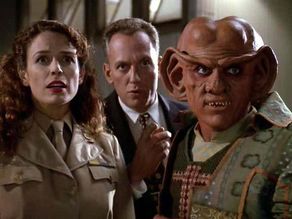 It's 15 November 1995, and time for another episode of Star Trek: Deep Space Nine.

Nog (Aron Eisenberg) sets off for Starfleet Academy, accompanied by his father Rom (Max Grodenchik) and his uncle Quark (Armin Shimerman) in Quark's brand-new shuttle. When the shuttle malfunctions - the result of sabotage by the cousin who gave it to Quark in the first place - all three Ferengi are transported back in time to 1947 and into the hands of the United States military.

The standard warnings apply: this episode is the next in Deep Space Nine's annual series of Ferengi comedies. There is always at least one each season. Some people like them, some hate them. Personally I take each one on its own merits. "Little Green Men" is one of the best that the Deep Space Nine team ever did.

There are basically two streams of comedy running alongside each other here. The first is a broad, enthusiastic satire of 1950s science fiction films. The second is a character-based family comedy that comes from Quark, Rom and Nog taking a road trip that has gone catastrophically wrong. Both streams work really well, and they complement each other excellently.

The satirical elements are played pretty broadly, and in some cases - such as the penchant for all the human characters to chain-smoke cigarettes - overplayed ridiculously until the joke simply isn't funny any more. There's a sense that the writers (Robert Hewitt Wolfe and Ira Steven Behr) did not quite trust the setting to be funny on its own, and as a result they push it a little further than it warrants.

Thankfully the comedic sparring of Quark, Rom and Nog more than makes up for it. Deep Space Nine really walks a tightrope with the Ferengi. They were created as a weirdly ineffective Klingon replacement but rapidly, intentionally or otherwise, re-envisaged as crass Jewish stereotypes for much of The Next Generation. Deep Space Nine has not changed their culture, but it has given it depth and nuance. It is, by this stage of the series, almost believable. The series has also managed to make Quark and his family oddly likeable while still giving them some pretty awful habits. Quark only agrees to fly Nog to Earth because he can deliver contraband cargo on the way back. Rom and Nog freely blackmail their own family member when they threaten to reveal his contraband to the Federation authorities. All three show themselves to be duplicitous, greepy and prone to cowardice, and yet due to strong dialogue and great performances by Shimerman, Eisenberg and Grodenchik they make a great impression on their audience.

It is worth dwelling in particular on Max Grodenchik, who has taken the character of Rom and - with the help of some great scripts - developed and advanced him from essentially background detail into a fully grown and interesting character in his own right. He acts like a Ferengi, but he's moved beyond being the simple, stupid younger brother into being a genuine smart and talented individual who is simply under-confident and nervous. Among all of the semi-regular Star Trek characters Rom remains one of the most sorely underrated.

Further revelations about Ferengi culture in the episode's early scenes are very welcome, and add to a growing list of information about how the Ferengi exist and function as an ongoing society. It really is masterfully done. The episode's 20th century scenes are fairly well paced. At the moment when it feels as if it's beginning to outstay its welcom, a surprise addition to the cast gives it the energy and plot to push through to a short, funny conclusion.

Some viewers are going to hate this episode, pretty much entirely because they dislike the Ferengi. That's fair enough: they were very irritating back in The Next Generation and they remain essentially the same kinds of characters here - only now they're funnier, and more understandable, and - surprisingly - rather endearing. Seven episodes into Season 4, and six have been good. This is one of them. The quality ratio rises to 86 per cent.
Posted by Grant at 2:23 PM