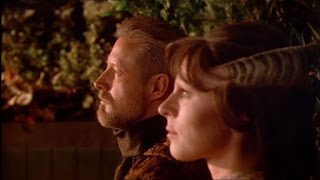 Just over four years ago I stumbled upon a copy of Babylon 5's original made-for-television film, "The Gathering", and decided to watch it again. I had seen it when it was originally released and quite liked it, and had gone on to watch the subsequent television series. The first time around I found the series a fairly frustrating thing, with every decent episode or performance matched by one that seemed pretty substandard or even actively awful. When the series chose to end a multi-season story arc in its fourth season with the protagonist shouting at the enemy to "get the hell out of our galaxy" I quit watching the series altogether.

After rewatching "The Gathering" I tracked down a copy of Season 1 and rewatched that. I reviewed each episode as I went. From there I moved on to the second season, then the third, and eventually through to the fourth and beyond the point where I quit the first time around. Now I have watched the final episode, "Sleeping in Light". I may be almost two decades late, but I have finally completed Babylon 5.

In the year 2281, twenty years after the end of the Shadow War, John Sheridan (Bruce Boxleitner) realises that he is about to die. He calls together his former Babylon 5 colleagues to say goodbye, before setting off for one final journey across the galaxy.

The first thing to strike me about "Sleeping in Light" is that it is not a climax but an epilogue. It does not add anything additional to the series' story that needed to be said. It does not wrap anything up that needed to be resolved. Babylon 5 has regularly cribbed from Tolkien's The Lord of the Rings, whether it was the use of the Rangers, substituting Gandalf's fall of Khazad Dum for Sheridan's fall at Z'ha'dum, echoing the Scouring of the Shire with the Earth Civil War, or any number of homages and lifts. In this case J. Michael Stracyznski - who both writes and directs this episode - cribs from Frodo's departure for the Undying Lands.

I hate long goodbyes, and of course this episode comes after an effective two-parter depicting how the regular cast all left Babylon 5 back in 2262. While both of those episodes had problems, they felt like a decent farewell - particularly Sheridan's exceptional monologue at the end of "Objects at Rest". To be honest, and despite its massive reputation with Babylon 5 fans as a fabulous tear-jerker, I found "Sleeping in Light" to be both narratively redundant and mildly irritating.

One obvious but superficial problem is that the episode's setting - 19 years after "Objects at Rest" - requires the cast to be made up to look older. This results in quite a bit of unconvincing old age make-up. A few of them, such as Sheridan and Vir (Stephen Furst), largely get away with it. Some of the others, particularly Ivanona (Claudia Christian), are not at all believable. It has a tendency to throw off suspension of disbelief.

Another key problem is that Straczynski's script simply seems to be trying too hard. The tone is leaden and filled with portent. We see each of Sheridan's old friends receive a hand-delivered invitation to go meet him on Minbar, and one by one we see them stop whatever they are doing and announce they will leave immediately. Every scene has the same miserable air to it, and they are laid one after another. Even when everyone is invited, we are immediately thrown into a dinner as everybody makes toasts to characters no longer alive.

The absence of those characters is felt keenly. I have consistently noted throughout this entire rewatch that Londo (Peter Jurasik) and G'Kar (Andreas Katsulas) were the best characters in the whole show, and they were played by the best actors. With both of them missing from "Sleeping in Light", the largest part of what made the show's best episodes work is not there. Also entirely absent is Lyta (Patricia Tallman), which seems an even deeper shame. We know what happened to Londo and G'Kar, but Lyta's future remains a mystery.

There is also the problem of when the episode was made. When it looked as if a fifth season was not going to be commissioned, "Sleeping in Light" was shot as the Season 4 finale. When a last-minute reprieve saw a fifth year go ahead after all, "Sleeping in Light" was held back and "The Deconstruction of Falling Stars" hastily assembled in its place. Why is this a problem? "Sleeping in Light" spends a lot of time showcasing where its characters are 20 years into the future: Sheridan and Delenn on Minbar, Garibaldi running a Martian corporation, and so on. As an end to Season 4 that is information worth telling the audience. As an end to Season 5 it repeats information we've already learned, and only within the last few episodes. It's an unfortunate redundancy. The year-old nature of the episode also has a strange effect in other ways. For example Sheridan is written and performed in a much better manner than he has been for much of Season 5. I have noted several times how weakly presented the character has been in the last year of the series, and it's quite startling to see a return of the Sheridan who drove much of the show through Season 4.

The episode continues to roll on. Sheridan leaves his friends in the early morning and - after a tearful farewell to Delenn (Mira Furlan) - revisits Babylon 5. He arrives just before it is decommissioned and demolished, the timing of which seems a little too convenient for the episode to paper over smoothly. From there it's a quick jump to the star system where the Shadow War ended, where Sheridan meets the immortal Lorien once again and is taken away to the galaxy's outer rim, never to return.

On the whole the episode just feels flat to me. I think it may be due to Straczynski's direction. This is his directorial debut, and he makes a lot of creative choices that feel exactly like the sort of choices a first-time director would make. Sheridan and Delenn's final embrace is close to ruined by a sudden tracking shot and musical crescendo that turns it close to parody. Several early scenes - particularly the first appearance of Garibaldi (Jerry Doyle) and Franklin (Richard Biggs) - feel weirdly forced and artificial. My overwhelming impression of the direction is ultimately that Straczynski is trying too damn hard. He strives so keenly for heartbreaking emotional moments that the episode regularly slides perilously close to self-parody.

It is no surprise that the part of the episode that does work is Ivanova's final monologue. Stracyznski almost always nails these, and this final episode proves no exception. The final moment of Delenn sitting and watching the sunrise, and an imagined Sheridan leaning forward beside her, as as damn close to a perfect moment as the series ever managed.

Such a beautiful ending, but at the same time the episode that leads us to it is simply not good enough. As an end to Season 4 it probably would have worked a lot better. Positioned where it is, and it is honestly a bit of a disappointment. That is a bit of a miserable ending to 111 reviews, but there it is. I moved back and forth over which way I was going to score "Sleeping in Light". It deserves to be so much stronger and more satisfying than it is, and that led me to consider scoring it with a thumbs-down. At the same time I know I have given worse episodes than this a free ride, and it would be unfair not give this final episode the same courtesy. So in the end "Sleeping in Light" lands on the right side of the good/bad divide - but it really should have been better than it is. Season 5 wraps up after 22 episodes, of which 13 have been good. The final quality ratio is 59 per cent.
Posted by Grant at 5:02 PM