Samurai Flamenco: "The Meaning of Justice" 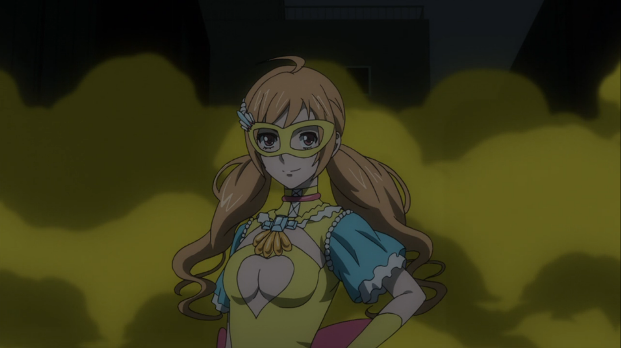 It's been a while since I've reviewed an episode of Samurai Flamenco (this is the fifth), so it's probably worth a quick reminder of what this anime is and what it's about. Masayoshi Hazama is a young male model and aspiring actor whose love for tokusatsu TV shows (think Ultraman or Mighty Morphin Power Rangers) is so extreme that he's taken to putting on a costume and taking to the streets of Tokyo as the masked vigilante Samurai Flamenco. His low-rent exploits - basically returning lost purses and interrupting muggings - have attracted the attention of the public, the scorn of the local police, and the adoration of the novelty-obsessed news and entertainment media.

It has also earned him a sidekick, Flamenco Girl, actually a successful pop starlet named Mari Maya with a penchant for excessive physical violence. The contrast between the polite, awkward Samurai Flamenco and the brash, brutally violent Flamenco Girl forms the basis for this episode, "The Meaning of Justice".

Elements in the news media have placed significant monetary rewards for anyone who can reveal their identities, leading to a series of traps by unscrupulous types faking assaults and muggings in the hope of attracting their attention. It's making Masayoshi uncomfortable, plus he's just been cast in a tokusatsu show for real. He's finding himself pushed from leader to sidekick in comparison to Mari, and so he takes a break from the entire Samurai Flamenco adventure. A slightly aggrieved Mari continues on her own.

So far I've been broadly charmed by Samurai Flamenco's light-hearted, deliberately small-scale antics. That vibe has shifted considerably with the introduction of Flamenco Girl. Her comedic ultra-violence chafes against what had already been set up in the series, and for two episodes in a row now it has been pushing it from gentle, silly comedy towards something more akin to Mark Millar's American comic book Kick Ass - which covers similar territory in much tackier and parodic ways. I vastly preferred the Samurai Flamenco of the first three episodes. This more over-the-top version simply isn't working for me. More than that, this episode simply doesn't have the energy that earlier instalments had. It felt a tiny bit tiresome and ordinary to sit through.

We're five episodes in, and to my mind three of them have been good. That leaves the series with a quality ratio of 60 per cent.
Posted by Grant at 6:05 PM