Journey Into Mystery: Stronger Than Monsters (2013) 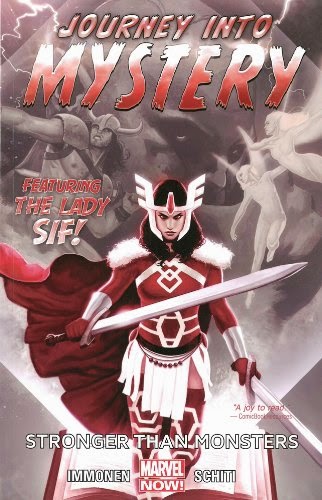 Journey Into Mystery is one of Marvel's oldest titles, running off and on in one form or another since 1966. It started off as a horror anthology, and then featuring an ongoing story about the Norse God Thor. It soon got retitled The Mighty Thor and ran under that title for decades. A few years ago its original title was restored, and the story given over to Thor's brother Loki - then recently transformed into a 12 year-old boy during the events of the crossover miniseries Siege. When that storyline wound up, Journey to Mystery was briefly passed over to the Asgardian warrior Lady Sif. This run did not sell particularly well, wrapping up after just 10 issues, although Marvel did release it to trade paperback in two slim volumes. The book I've just read, Stranger Than Monsters, is the first of the two.

By the time the book begins, Asgardia - the home of the Norse Gods - has suffered multiple attacks and sieges. It is also hovering on a floating mountain above the small town of Broxton, Oklahoma. The warrior Sif, seeking an advantage against future attacks, visits a witch and gains the super powers of the ancient Asgardian berserkers. Then she gets ambushed and thrown into a dimension with ancient Asgardian berserkers. Then, as they say, hijinks ensue.

Kathryn Immonen writes this book to perfection. She has a tone that walks a fine line between the 'olde-worlde', florid language that Marvel's Thor comics regularly indulge, and active mockery of that language. It has a proper plot - by seeking the berserker power Sif finds herself in serious trouble - but it's pretty damned funny at the same time. The book balances its two tones very deftly, bouncing back and forth. All up it's incredibly entertaining. Characterisation is spot-on as well: Sif makes for a great protagonist, and it's a real shame the market didn't take to this run.

Valerio Schiti's artwork is the perfect match as well. It's beautifully designed, with immense visual appeal, and Schiti does a particularly good job with the cast's facial expressions. Of course it's great to read a comic with genuinely amusing dialogue, but if the artist can perfectly sculpt faces to match that dialogue it becomes twice as funny. Importantly he can also handle the book's action sequences - including a knock-down fight on the streets of New York.

If there's a drawback it's that the book gets partially mired in Marvel continuity, and that might make a few sections rather challenging for the uninitiated reader. One of the five chapters features a guest appearance by Spider-Man, who's acting particularly weird and out-of-character. This is because it's not Spider-Man but rather the villainous Dr Octopus in Spider-Man's body. While readers at the time probably knew that the "Superior Spider-Man" arc was going on, anyone coming to this book cold probably won't have a clue - and the book really doesn't help you out. Other extended references to the Siege miniseries and other recent Thor-related events are likewise a little disorientating.

Overall, however, this is a great book, and comes very strongly recommended.
Posted by Grant at 9:15 AM