Hercules: The Legendary Journeys: "The Road to Calydon" 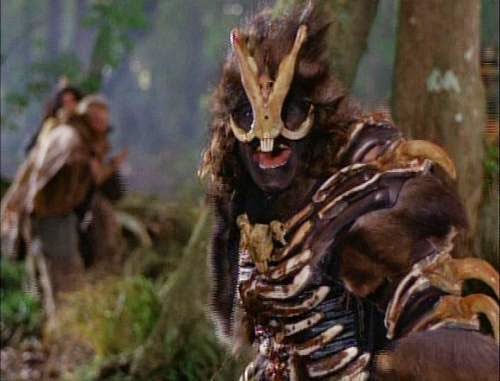 It's 6 February 1995, and time for Hercules: The Legendary Journeys.

Hercules stumbles upon a community of refugees who are attempting to live in a ghost town cursed by Hera. While he tries to escort them to the safety of the free city of Calydon, their leader continues to court disaster by spreading dissent and secretly carrying a sacred cup that Hera wants back.

It's been quite a while since I reviewed an episode of Hercules: The Legendary Journeys. That episode, "Eye of the Beholder", was very much a mixed bag: high on charm but very low on script and production quality. If anything "The Road to Calydon" is a step in the wrong direction. It's also very cheap, rather shoddy to look at, and directed and performed with a very loose and lazy style. On the other hand the charm that made "Eye of the Beholder" at least partly watchable is entirely absent here. It feels roughly thrown together rather than crafted, as if its production team knew that a certain audience would watch the episode no matter how well or badly it was put together - and it's been put together very badly indeed.

The performances here are dreadful. Kevin Sorbo works to certain extent: his Hercules always has a sort of loose, goofy charm to him that's rather likeable. The episode's guest cast are terrible, either over-acting horribly or not really bothering to act at all. One of the worst offenders is Norman Forsey, playing the cackling blind seer Tiresias. He only has one note to his performance, and it's an awfully load and painful one. John Sumner does a little better as the duplicitous community leader Broteas, but he's saddled with a very poor script.

The script. Oh, it's such a poor script. There's some intriguing back story about an entire town burned to ashes and a princess turned into a dog, but by the episode's climax there's no resolution to their fate and the dog is still a dog. There is a climax in a swamp with Hercules fighting a tremendously unconvincing pterodactyl, but that pretty much demonstrates nothing beyond the production team's willingness to write scenes they functionally aren't capable of bringing to the screen - not without embarrassing themselves anyway. Now there are many ways to produce low budget television, or to overcome a small visual effects budget, but based on the first three episodes Hercules is yet to find that method.

Maybe the writers (Andrew Dettmann and Daniel Truly) deserve a little bit of credit: the pterodactyl is really a sort of giant looking bird, inspired by the Stymphalian Birds of the mythical "Twelve Tasks of Hercules". Thanks to the visual effects team, however, it just looks like a ridiculous dinosaur to me.

Three episodes in, and there's only been one episode of Hercules' first season that I can safely regard as 'good'. That leaves the season with a quality ratio of 33 per cent. Let's hope it improves.
Posted by Grant at 10:15 PM