Kokoro Connect: "A Story That Had Already Begun Before Anyone Realised It" 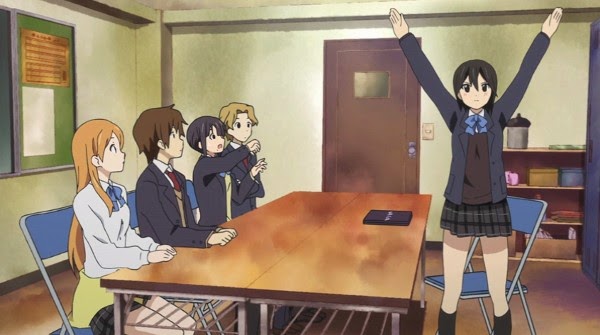 Five high school students - two boys and three girls - mysteriously begin to swap bodies. When I heard that this was the premise of Kokoro Connect, I was fairly suspicious. Such a premise had a slim chance of being an interesting psychological thriller, but a much larger chance of being an unpleasant and sleazy excuse for adolescent misbehavior. While I'm a big fan of Japanese popular culture I'm also familiar enough with it to know that the latter was a lot more likely than the former.

Based on this first episode my concerns seem well founded; within minutes one of the boys is inside the body of one of the girls and trying to strike up a lesbian encounter. It's enough to make you throw your hands up in the air, muttering to yourself: oh Japan.

The really annoying part, though, is that there is just enough in the episode to suggest that more interesting, non-sleazy aspects of the premise are going to be explored as the series develops. So do I keep watching or not?

The five protagonists are relatively stereotypical. We've got two boys: Taichi and Yoshifumi. Taichi is that traditional sort of earnest yet nervous protagonist you've seen a hundred times. Yoshifumi is the slightly taller, more outgoing boy with a penchant for adult videos and who jumps at the first opportunity to turn the body-swap phenomenon into something sleazy. He too is overly familiar, in an eye-rolling sort of fashion.

Then there's three girls: Himeko, Iori and Yui. Himeko is the 'angry one'. Iori is the 'friendly one'. Yui is the 'quiet one'. They're little more than cookie-cutter place-holders; I hope that future episodes will find the time to give them at least a second dimension, but to be completely honest I'm not certain that they will.

This is not a promising start, but I've seen anime series start shakily and develop well, so this one will get at least another one or two episodes out of the benefit of doubt. It's got a long way to go to hit a sufficient quality, however, since it spent most of this episode digging itself a hole. On its own merits this episode cannot be recommended.
Posted by Grant at 9:21 PM