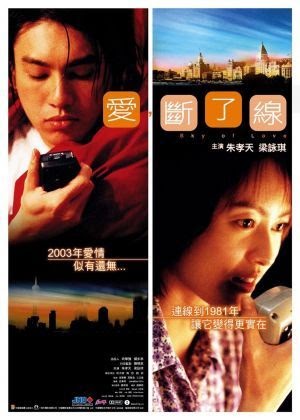 Xiao Jia (Gigi Leung) is a Chinese university student living in 1981 Shanghai. Through a panicked moment of embarrassment she comes into possession of a broken CB radio unit. When she takes it home, however, it appears to work, and she begins a series of conversations with fellow student Jia Hui (Ken Chu). When an attempt to meet up in person fails, both discover the impossible truth: she is in 1981, and he in 2003, and they are somehow communicating through time.

Sky of Love is an unashamedly emotional Chinese melodrama, replete with all of the standards of that genre. So watching this film will provide impossibly pretty young protagonists, simplistic but heartfelt motivations, corny humour, and more than one sad montage of tearful youths standing in the rain backed by a mournful pop ballad. Criticising these aspects of the film are effectively pointless: if you don't like them, or can't tolerate their presence, then you're never going to like any film of this nationality and genre. It is, as they say, what it is.

There are a few things that lift the film above the pack, notably Gigi Leung's strong central performance as well as an unexpectedly restrained and downbeat ending. Everything in the film leading up to its climax suggests a certain kind of ending; that we're actively denied closure is the film's boldest and, to be honest, probably it's only innovation.

At the same time there are a few things that drag it backwards: Dawei Tong gives a very limited performance as Xiao Jia's 1981 love interest Wen Tao, and while most of the film's stereotypical moments are commonplace to many similar films, here they really do feel particularly stereotypical. The tearful montages in particular are ripe for parody and ridicule.

The film is a remake of an earlier Korean movie, Ditto, although I have not seen the earlier film. It's reportedly close to a shot-for-shot remake, so I'm not sure how much worth there is in tracking the elder film down. It also bears some similarities to the 2000 American film Frequency, which used a similar premise to enable a separated father and son to solve crimes together. I remember Frequency being pretty ordinary; so is Sky of Love.
Posted by Grant at 5:42 PM