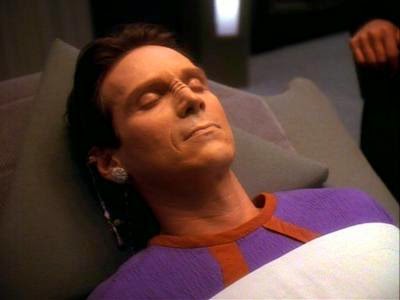 When Season 3 premiered with "The Search", it was the first time that Deep Space Nine had aired without a more prominent Star Trek series, The Next Generation, airing at the same time. With the initial broadcast of "Life Support" that brief period of dominance ended; between "Past Tense, part 2" and "Life Support" UPN premiered Star Trek: Voyager, and poor DS9 was back to being the under-appreciated sibling series again. It was always a shame how DS9 got overshadowed by the other series, because to my mind it's still the best version of the Star Trek franchise since the 1966 original.

Take "Life Support". I remember being quite underwhelmed by it back in 1995, mainly because it is focused on Vedek Bariel (Philip Anglim), a character to whom I never warmed and whose departure here actually gave me some relief. Coming back to it for the second time, almost exactly 20 years later, and I'm surprised at just how good it was.

Here's the pitch: there's an accident on a Bajoran shuttlecraft. One of its passengers, the religious leader Vedek Bariel, is critically injured and dies. Using quick thinking and the latest Starfleet technology, Dr Bashir manages to resuscitate him. He's on borrowed time, however, as one treatment leads to fatal side-effects that require another treatment, and that second treatment requires a third, and so on. Before long an immensely uncomfortable Bashir is struggling to satisfy his own ethical position in the face of respecting his dying patient's wishes.

Bariel doesn't want to die yet, and he refuses to be put in stasis so that a permanent cure to his ailments can be found, because he is advising Bajor's supreme religious leader Kai Winn in peace negotiations with the Cardassian Union. After decades of brutal occupation and an uneasy truce in recent years, a sustainable reconciliation now seems possible. Winn, who could easily demand Bariel quit the negotiations and thus save his life, is happiest with him where he is. If he succeeds, she can take the credit as the leader of the negotiations. If he fails, she can blame him for the failure. Either way, he's going to die if he stays awake and active, and as a long-time resentful competitor against him, she's happy to see him go. This series has always been at its best when playing with Bajoran politics, and this episode is a marvellous example of that. It's also a great episode to showcase just how loathsome a character Kai Winn is. It takes genuine talent to create a character who is both easy to despise and entertaining to watch. The DS9 writing team ace it with Winn, and Louise Fletcher is the icing on the cake. She is pretty much Hollywood's best actor for when you need to really hate a character. I still hate her Nurse Ratched from One Flew Over the Cuckoo's Nest.

There's an unexpected subplot to this episode, in which Jake and Nog go on a disastrous double date. It's an odd contrast to the heightened trauma of the main storyline, but I think that's why I like it. It's also a rare example of human characters in Star Trek acknowledging differences between their own values and Ferengi culture, and having a bit of respect for a change.

So in the end, what do we have? A beautifully-written exit for a recurring character, with proper time given to address his relationship with Kira. A wonderfully written showcase of Bajoran politics. A major step forward in the series' status quo. A strong debate on medical ethics, with a good focus and exploration of Dr Bashir's own values. There's one great scene he shares with the Kai, in which he starts off begging her to persuade Bariel to go into status and ends with him deliberately making a powerful enemy for life. It's the best scene Siddig el Fadil has had in the series thus far, and after "Past Tense" it really shows off a newer, more serious Bashir. He's one of my favourite Star Trek characters, and these recent weeks have showcased precisely why that is.

This is the 10th good episode out of 13, and I have to say I am enjoying the hell out of this Season 3 rewatch. The quality ratio is up to 77 per cent.
Posted by Grant at 9:01 AM