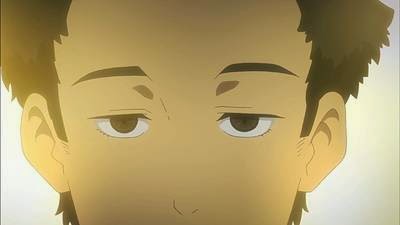 After further body-swaps occur, this time involving three of them at once, the members of the Cultural Research Club finally begin to realise the ramifications of what is happened. What's more, they are visited by one of their teachers, Mr Goto, who appears to have experienced a body swap of his own.

I gave Kokoro Connect a second change, and I am tentatively glad that I did. While the premise of this anime - five teenagers begin to randomly swap bodies - is open to all manner of sleazy and puerile abuse, this second episode actually takes a step back and revisits the concept from the ground up. They realise it would be easy to slip up and draw attention to themselves just by walking into the wrong toilet by mistake. How is a boy going to react to swapping into the body of a girl who is menstruating? How do you even go to the bathroom without violating the privacy of another person?

That Kokoro Connect is now covering these issues is a relief, and a sign that the immaturity of the first episode isn't going to be the only thing sustaining the series. This episode takes things one step better with the introduction of "Heartseed", an unknown alien intelligence that has taken over high school teacher Mr Goto's body. It's a callous, detached creature, seemingly initiating all of the body swaps out of a sense of scientific curiosity and without any regard for the feelings of its test subjects. The scene in which Heartseed reveals itself to the five students is a great one, with a rising sense of dread and tension that's excellently animated and acted.

I am still not fully onboard with the series, as the more adolescent moments continue to make themselves known. They're less pronounced in the second episode than they were in the first, but they're still there. All up, however, this is a very good 25 minutes of anime, and I'm happy to move on to the third episode. We're running with a quality ratio of 50 per cent.
Posted by Grant at 6:36 PM