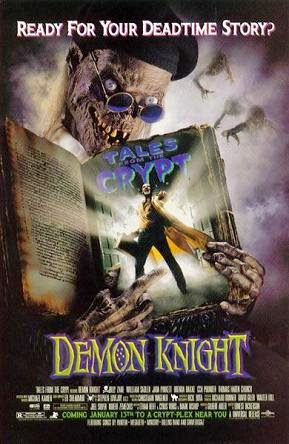 20 years ago today Universal Pictures attempted to expand a successful television anthology series into a motion picture franchise. Their attempt underperformed somewhat - it earned just $21 million from a budget of about $12 million.

It's a pity: Tales from the Crypt presents Demon Knight is a garish, pulpy horror film with great performances and a lot of well-played humour. There is a question of whether the Tales from the Crypt framing sequence harmed its chances. Would audiences go and see in the cinema something they'd previously been able to watch on television in the comfort of their own homes?


The series conceit was simple: each episode would be a self-contained horror story for television, introduced by the Cryptkeeper: a cackling, skeletal puppet host with a penchant for tasteless puns and jokes. So successful was the TV series that the Fox network purchased the rights for network re-runs, beginning in 1994. Canadian animation company Nelvana produced a Tales of the Cryptkeeper cartoon. Finally in 1994, Universal Pictures announced that they would produce a trilogy of Tales of the Crypt films beginning with Tales from the Crypt: Demon Knight in January 1995.

The film stars Billy Zane as the titular demon, back at a time when it seemed he was about to become a major leading actor in Hollywood. He plays the role with enormous energy and charisma. Other roles are played by the likes of William Sadler, Thomas Haden Church, Jada Pinkett-Smith and CCH Pounder, all of whom are strong performers recognisable from numerous other film and TV productions.

The Demon Knight screenplay actually pre-dated the Tales from the Crypt TV show by more than a year. It bounced from one production company to another until it finally crossed Joel Silver's desk. During development it was unclear how much money Universal would be willing to invest in the film. Two versions of the script were developed: one with demons and visual effects, and another with no visual effects and the demons all represented by anonymous men in black suits. In the end Universal went with the former, even adding more funding after production had completed to reshoot the film's climax. The film was directed by Ernest Dickerson, who had previously directed the critical acclaimed drama Juice (1992).

There was a plan for the Crypt movies to link each film via a series of ancient occult artefacts, slowly revealing them all to be set inside the same fictional universe. It's a neat idea, and a shame that it never had the chance to develop over time. In the end Universal only made one more Tales from the Crypt film, 1996's Bordello of Blood, before abandoning the franchise.
Posted by Grant at 9:56 PM