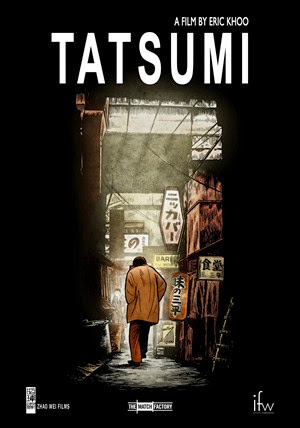 Tatsumi is a wonderful oddity. It's an animated film, made in Singapore and Indonesia in 2011, although it's performed entirely in Japanese. Part of it is an animated documentary on the life of noted manga writer/artist Yoshihiro Tatsumi, narrated by the artist himself. That documentary, however, is regularly interrupted by a series of five animated short films based on his works. The result is a strange project that straddles a line between fiction and fact, or drama and documentary. It feels unique, and due to its unusual format it presents a more wholly rounded and insightful look at an artist's life and works than a more traditional documentary could ever achieve.

Yoshihiro Tatsumi is the noted creator of 'gekiga', a specific form of mature-readers manga that he developed in order to separate his works from the more popular, child-friendly stuff getting sold at newsstands around Japan. His gekiga became enormously successful, and he was instrumental in expanding the medium into new genres and readerships. His works have a specific melancholic and rather bleak tone, and that tone is all through Tatsumi, which is both a respectful documentary and faithful adaptation.

The animation is deliberately limited, with Tatsumi's own manga artwork acting as its basis and with limited motion bringing each panel to life. It takes a few minutes to get used to, since it's so limited compared to the usual sort of motion picture animation that gets released into cinemas. It fits Tatsumi's stories and aesthetic perfectly, however, and indeed shows off just how cinematic his works were to begin with. The five short stories presented here also use a limited colour palette, which I think reflects the two-colour printing process of manga in the 1960s and 1970s. It also helps to visually distinguish those sequences from the full-colour animation of the documentary sections.

Of the five short stories presented, "Beloved Monkey" is the most effective, brutally showcasing the decline of a factory worker whose only joy comes from a pet monkey - a monkey that doesn't seem half as happy with its living arrangement as he is. The story's tone shifts seamlessly from gentle tragedy to confrontational horror, with a brilliant ending. The other shorts vary in tone somewhat, from the suspenseful mystery of "Hell" to the awkward humour of "Occupied". It makes for an outstanding introduction to Tatsumi's works.

The fictional sequences are narrated by theatre actor Tetsuya Bessho, along with a cast of Japanese non-actors living in Singapore. You wouldn't know the cast were amateurs, as they're all very well directed and give generally strong performances.

This really is a wonderful film. While it's very small budget might make it somewhat unappealing to many animation fans, it's a must-see for anyone interested in learning more about one of Japan's best writer/artists. While it's fascinating to hear Tatsumi talk of his life and career, it's the five short films that make it worth tracking down; they stick in the mind long after the film is finished.
Posted by Grant at 8:57 AM