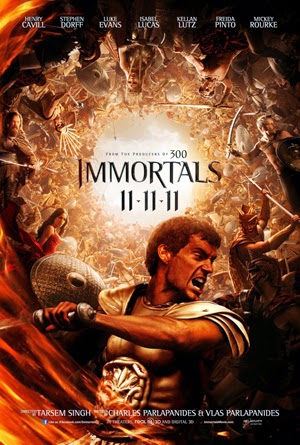 Tarsem Singh is potentially cinema's greatest visual stylist of bad films. His debut feature, The Cell, was slenderly written but more than made up for it with some of the most stunning visuals ever committed to screen. More recently, Mirror Mirror had a dreadfully silly script and jokey performances, but even through all of its faults a beautiful aesthetic managed to shine through. In between there is 2011's Immortals, which has a script that is short of plot, depth and characterisation, but in many scenes looks like a moving Caravaggio painting. It's such a maddening career to watch: always one step short of greatness. I have been informed his middle film The Fall is his best work, but sadly I have yet to track it down and watch it.

So the story, in a nutshell: King Hyperion (Mickey Rourke) wants to find a magical bow with which to free the Titans and rule the world. Through godly intervention and fate, the peasant spearman Theseus (Henry Cavill) rises up to challenge him. There are a lot of sword fights, mass battles, and gods in ridiculously silly hats.

Oh the hats. They're so ridiculous that the script even has Theseus crack a joke about one of them. The costuming of Immortals straddles an uncomfortable line between the ridiculously silly and the genuinely impressive. The one thing I can say with certainty is that it's a film with a very bold design aesthetic. Shot entirely on green-screen sound stages with computer-generated backgrounds, it regularly feels less like a motion picture and more like avant-garde theatre. Sometimes the design lets the film down a little: much of the plot focuses on a magical world-shattering bow, and when it is finally found it looks a little too much like a modern sporting bow spray-painted silver. Who knows - maybe it is a spray-painted sporting bow, and they spent all of the budget on Mickey Rourke's hilariously impressive helmets.

It's a thunderingly loud movie, and quite brutally violent. It shares producers with Zack Snyder's 300, which isn't an enormous surprise. They share a lot of similarities, although the screenplay here is a lot less childish and unlikeable. That said, some of the torture depicted here is genuinely quite nasty, including one scene of appalling violence against women. In many ways that reflects the source material - Greek myth was always pretty extreme - but at the same time the film makes some remarkably bold diversions from the familiar stories of Theseus and the Titanomachy.

The cast are generally quite strong. Henry Cavill makes for an appealing Theseus, and it's clear watching here why he was such an obvious choice for Warner Bros to cast him as Superman. Mickey Rourke is a great villain, chewing the scenery in his now-standard gruff, mumbling fashion. Supporting actors like John Hurt, Frieda Pinto and Stephen Dorff all acquit themselves admirably. Luke Evans makes for a striking, rather young sort of Zeus. His role here is grossly underwritten, but he makes such an impression with it anyway. I keep seeing him in films (he plays Bard in The Hobbit) yet he never seems to quite make it to super-stardom and I'm honestly not sure why.

There are a lot of faults in Immortals. It has a plot that leaves much to be desired, and lacks sufficient character. The actors do their best, and those visuals: when they're at their best they're like a moving painting. I deliberately referenced Caravaggio early on. The resemblance is uncanny, and the results often glorious to watch.
Posted by Grant at 11:06 PM