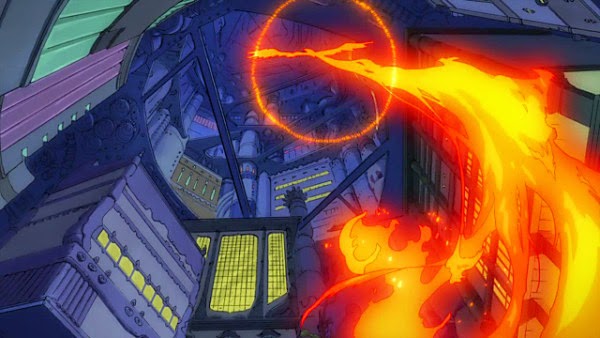 In episode #7 of Gatchaman Crowds, Rui decides to use the Crowds to destroy Berg Katse - with catastrophic results. Sugane and Joe rush to help, but even they may not be strong enough to defeat Katse. Will Paiman authorise the rest of the Gatchaman team to assist?

Thanks to the careful groundwork laid in earlier episodes, "Abjection" winds up the best installment of Gatchaman Crowds to date. It has plenty of action, great character work, a few surprises and some laugh-out-loud moments thrown in as well.

Rui's initial attempt to attack Katse is jaw-dropping to watch. It's not that the Crowds cannot match Katse's powers; dramatically speaking, that was to be expected. It's that the fight is so horrifyingly one-sided. Katse doesn't just drive back the Crowds. They're massacred. Katse then descends upon a defenceless Rui with an unexpected brutality. This is really quite confronting stuff given the tone of earlier episodes, and makes a huge impact as a result.

Beyond this there are some outstanding moments and developments. Joe really does give his all in fighting off Katse, in what is easily the most prolonged action sequence of the series. We finally get to see Paiman's Gatcha form, which - given he's a tiny alien panda - is about as over-the-top and deliberately hilarious as you can imagine. It's a lazy turn of phrase to call something laugh-out-loud funny, but in this case I genuinely laughed out loud.

Ahead of all of these strength is the real stand-out: Hajime. She's spent the first six episodes as a vaguely irritating, ultra-enthused teenager: too keen, too happy, too impulsive. Pretty much her first act was to stop an alien incursion - not by killing the alien but by befriending it. She goes one better here: after Joe and Sugane have both damn-near killed themselves fighting Katse, it's Hajime who actually stops to ask the super-powered alien what it wants. After the wall-to-wall carnage of the episode's first half, it makes for a startling, and tremendously enjoyable, contrast.

We're up to six good episodes out of seven, and a quality ratio of 86 per cent. I'm pretty ready to call this series as one of my favourites. It's going to take a remarkable downturn in quality to stop me from enjoying it.
Posted by Grant at 10:12 PM