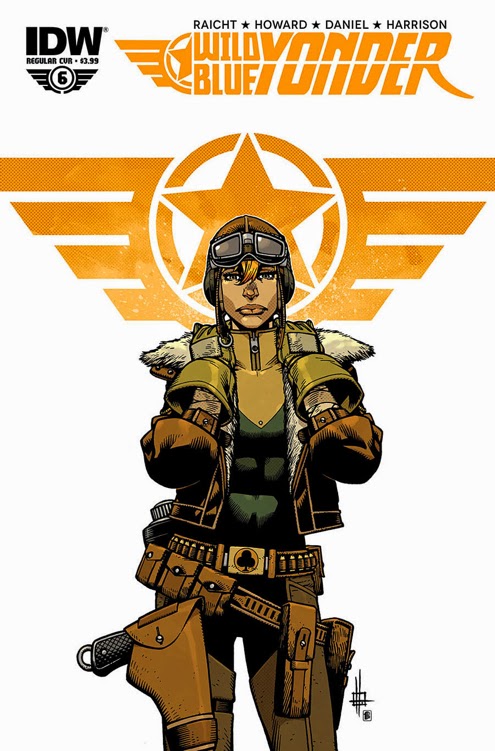 Wild Blue Yonder #6 finally hit comic stores this past week, five months late. It's been a rough release schedule for this miniseries: funded via Kickstarter, distributed via IDW and then bogged down by delay after delay. It must have had a terrible affect on sales. Issue #1 was released in June 2013, after all. I'd be interested to know how many readers stuck around.

It's a shame that the delays occurred, because this has been an immensely entertaining book. It's a post-apocalyptic story, as airships battle for the remaining fuel resources high among the clouds. It boasted strong character work, some nice world-building and sensational action sequences. With all of the flying it reminded me a little of Hayao Miyazaki's animated films, albeit with a much grittier edge to it.

This final issue wraps things up in a satisfying way, but at the same time it feels just a little bit truncated. The miniseries was initially solicited for just five issues, suggesting that something went a little wrong with the original plotting process. Truth be told this book could still do with another 10 pages or so.

When it's collected into a trade paperback this year it would be well worth your time tracking this series down. Now that the delays are all over, and it can be read all at once, it's a very satisfying book. (4/5)

Under the cut: reviews of The Autumnlands: Tooth & Claw, Batman and Robin, Batman Eternal, Batwoman, Black Widow, Doctor Who, Lumberjanes and The Wicked + the Divine.

It turns out the third time's the charm for The Autumnlands, as this issue kicks the storyline into high gear and takes an enormously promising comic into 'classic' territory. The plot has become more complex, the characters more tightly defined, and it's much easier to see the storyline on the horizon now that we've had a few issues to let Busiek's fascinating fantasy world come to fruition. In case you're unfamiliar with the premise: in a fantasy world populated by anthropomorphic animals, a group of wizards have pooled their powers to bring back an ancient champion: only the hairless, angry 'champion' they bring back is not who they expected (he's a human). Issue #3 introduces Goodfoot the Sly, a fox trader who claims to be one of the good guys. It's pretty clear from her first appearance that she isn't. This book is seeing Busiek play to his strength, which is taking archetypes and adding fresh depth and resonance. Benjamin Dewey's artwork is perfect. A lot of people might shy at the whole 'anthro-animals' aspect, but if so they need to see Dewey's art. It's a lot more realistic than you'd normally get. (5/5)

This isn't quite an epilogue to "Robin Rises", but at the same time it isn't really its own story either. This is an establishment of a new status quo: Batman and Robin reunited, Damian Wayne alive and well - and with Superman-level superpowers thanks to his experiences in Apokolips. It's beautifully put together, not only establishing this strange new power set but also revelling in the warm father-son relationship between Bruce and Damian, and building on plot elements left over at the end of Grant Morrison's Batman Incorporated. It's great stuff. (4/5)

Bluebird got her splash-page reveal at the end of last issue; this issue is her first proper adventure, diving into a warehouse full of Mad Hatter-controlled teenagers to rescue Red Robin, Red Hood and Batgirl. Meanwhile Stephanie Brown is reunited with her mother. Bloody DC: we've been complaining for three years that we want Steph Brown back, and even though she's in this weekly series we're now up to 42 issues and she's barely done a thing. Meanwhile Harper Row is getting well established as the big new female sidekick of the Batman Universe. I really like the character, but do wonder if maybe DC should have done one or the other - unless they're building up to a monthly Bluebird and Spoiler comic. I'd be very much down with that. They could even be the foundation of a new Birds of Prey. (2/5)

Batwoman's slow, ignominious limp towards cancellation continues. It's easy to see the method in Andreyko's madness - introduce a new team of intriguing, supernatural-themed characters - but it's taking an oddly long time to pull together and is making the whole book drag painfully. Kathy Kane remains a vampire. I initially assumed this was a temporary thing, but it's been her status quo for so many issues now that I'm wondering if they just decided to make Batwoman a vampire. A team including Ragman, Etrigan the Demon and Red Alice feels quite a bit like a return to the excellent Shadowpact of some years past, but at the moment the writing simply isn't cutting it. (2/5)

Another month, another issue of Black Widow. This is an eerily consistent book - so much so that it's getting to the stage where I could simply reprint last month's review and just change the issue number. So, in short: Edmondson's script is well crafted with intelligence espionage action and a great handle on Natasha Romanov's character. Phil Noto's artwork is rich, stylish and extraordinarily well suited to the more mature-readers, realistic tone of the book. Once again the only drawback is the pace. It's taking an absolute age for things to happen, and it's really dragging on the story's momentum. (4/5)

Warren Pleece's artwork seems a great fit to something as whimsical as Doctor Who. He does a great job on this issue, which sees Alice return to London to sort out her late mother's estate, while the Doctor, Arc and John see about stopping a millennia-old intergalactic war. The ongoing story arc that's been lurking in the background is back, and given it involves a silhouetted Time Lord I'm really curious as to what Williams is developing. The same recommendation from earlier issues applies: if you liked Matt Smith's tenure as the Doctor, you'll love this book. It has the tone of his era down perfectly. (3/5)

I am so glad that this exceptional and hilarious all-ages comic got expanded from a miniseries to an ongoing. This new arc sees the girls work on achieving the more boring merit badges in camp, while Mal and Molly head out on a date in the forest. It's wonderfully sweet, and great to see what is basically a comic book for kids present same-sex romance in such a natural, matter-of-fact fashion. Of course the date ends in running for their lives from an angry pack of dinosaurs, but that's what Lumberjanes is all about. This is just such a wonderfully enjoyable comic, and perfect at what it does. (5/5)

This issue further expands and illuminates Gillen and McKelvie's world of 21st century gods with a story set almost entirely inside a god-worshipping convention. It even comes with an annotated map of the convention centre. There's two things going on here, basically: further developments of the main mystery plot, as Lucifer's murderer continues to elude detection, and a gentle but pointed riff on the comics convention circuit. One scene mid-issue, introducing the god Woden, is jaw-droppingly good stuff. This remains one of the best books on the market - and I think it might be getting even better as it goes. (5/5)

Winner of the Week: It's a close one, but I'm calling it for The Autumnlands.
Loser of the Week: Batwoman is limping badly, I tell you.
Posted by Grant at 9:30 AM