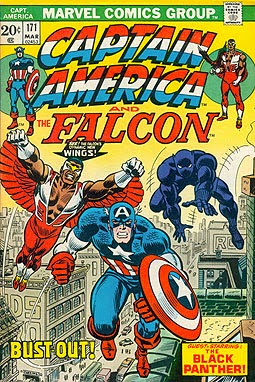 In Secret Empire, Captain America finds himself framed from murder and shunned by mainstream America as a criminal organisation known as the Secret Empire seeks to destroy his reputation. His journey to redeem his good name sees him team up with the X-Men, and leads him to a very unexpected final battle in the White House.

This collection brings together issues #169 to #176 of Captain America and Falcon. In many ways it seems a rather appropriate storyline to read at the moment, since it's narrative - Captain America and the Falcon go on the run when it turns out a secret organisation has infiltrated the American government - is eerily similar to the plot of last year's movie Captain America: The Winter Soldier.

The "Secret Empire" arc was written by Steve Englehart, who managed to pick a fine time to start writing the adventures of patriotic Captain America. The Vietnam War had scarred American culture pretty horribly, and the Watergate scandal had taken out President Richard Nixon and made a lot of people very cynical about those in power in their country. In that kind of environment, what's a superhero wearing the American flag supposed to do?

To be honest it's a pretty inspired angle to have your walking symbol of the American dream realise that what he stands for doesn't really exist any more. Englehart hit the ground running with this story arc, finishing with a despondent Steve Rogers stepping away from the Captain America identity altogether. The storytelling is pretty old-fashioned by today's standards, of course, but remains incredibly entertaining and very readable. One big difference that's immediately obvious in comics from this period is that there wasn't an assumption that the reader of any given issue had read the previous one. As a result there's a surprising amount of back-tracking, flashbacks and info-dumps to keep everybody up to speed.

There's also a striking number of footnotes from the book's editor, noting where storylines are being woven in from other Marvel comics and why particular characters have it out for one another. This arc only runs for eight issues, but features appearances by Iron Man, Black Panther, Thor and the X-Men - then actually without a regular comic to call their own. Villains come in from earlier appearances in The Avengers and Tales to Astonish. It's fascinating reading such a closely interrelated fictional universe. Even though they still weave things in and out of their titles today, Marvel's nowhere near as inter-woven as they were in their heyday.

Sal Buscema's artwork is great: bold, crisp and iconic. Some of the character designs for the various villains and gadgets are rather dated and strange, but to be honest that adds an additional level of charm. If the art and the story are presented with talent and integrity - and they certainly are here - then they tend to come across regardless of how dated the fashions and the trimmings may be.

Perhaps the strangest part of this comic- no, let's try that again. Far and away the strangest part of this comic is the revelation that "Number One", the reigning masked leader of the mysterious Secret Empire, is disgraced former United States President Richard Nixon. He's not seen, and he's not named, but when he pulls off his mask from behind, and Captain America gives the traditional shocked gasp of 'You!!', and the revealed villain then briefly explains that he wanted to be President again, and was willing to attempt it via a violent coup d'etat using the mental energy of half a dozen kidnapped X-Men, before shooting himself cold dead in the Oval Office out of the shame of it all, it's rather difficult to work out how to emotionally respond. Englehart must have really hated Richard Nixon.
Posted by Grant at 10:28 PM