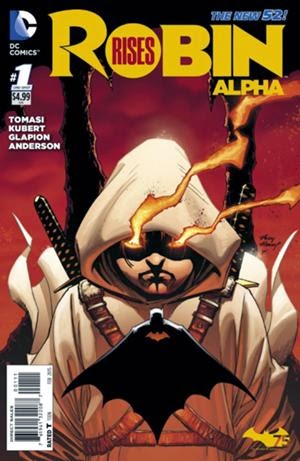 Quite a large number of years ago now, Grant Morrison wrote a Batman storyline in which Bruce Wayne discovered that his one-night stand with Talia al Ghul had resulted in a pregnancy, and that he had a 10 year-old son named Damian. Then for a beautiful time Damian assumed the mantle of Robin, and he and Batman fought crime in Gotham City: not just partners, but also master and apprentice, and father and son. Then Damian died, and Bruce was bereft. For the past 18 months or so Batman and Robin has been a book about Bruce Wayne dealing with his grief, and subsequently finding a means of bringing his son back from the dead.

That resurrection is here, in Robin Rises: Alpha, the final instalment of the storyline which sees Damian take on Kalibak of the New Gods in a Batcave fist-fight. It's perhaps a little disappointing, since it's a $4.99 book and we really do get one big fight with some character work around the margins. It's very beautifully illustrated by Andy Kubert though - he was Damian's original illustrator - and beyond anything else I'm just glad Damian is back.

This isn't just a great issue for Damian fans, though: Alfred in particular gets some great moments as he waits patiently for his family to return from Apokalips, but it's also a good issue for the Bat-pets Titus and Bat-Cow.

I used to think Tim Drake was my favourite Robin, but he's been supplanted. Damian is bold, smart, unbearably rude and cocky, and the perfect contrast to Batman's cold, measured self-control. And now - and I suspect temporarily - he has super powers, which means reining in his excessive behaviour all the more difficult. I can't wait to see how this goes, and for once I'm genuinely pleased to see the revolving door of death continues to swing at DC Comics. (4/5)

Under the cut are reviews of comics published on 24 December 2014: Aliens, Aquaman, Batman, Batman Eternal, Black Science, Daredevil, Doctor Who, Gotham by Midnight, He-Man, Infinity Man and the Forever People, The Massive, Revival and She-Hulk.

The Aliens are closing in as Derrick Russell makes further discoveries about the planet on which he's been stranded, and the weird black goo that's caused evolution to run out of control. Another one of Dark Horse's Alien/Predator/Prometheus crossover miniseries ends, and in this case it actually seems to end in a reasonably satisfying fashion: lots of threads left hanging to be picked up by the other miniseries, but still entertaining enough to stand on its own. Patric Reynolds' artwork has been very easy on the eye as well, and rather reminiscent of some of Dark Horse's Aliens books from earlier decades. (3/5)

Aquaman's search for his missing mother leads him to Gorilla City, and a confrontation with Gorilla Grodd. There's something so wonderfully silly about Grodd: a brain-eating talking psychotic gorilla who is usually found fighting the Flash, but in a fistfight with Aquaman he makes about as much sense. This is a fast, entertaining superhero comic: not too serious, but at the same time not too stupid and inconsequential. Pelletier and Parsons' artwork continues to impress. (3/5)

This tie-in to Batman's current "Endgame" storyline is pretty much the best single comic book of its week. A cocky journalist comes to Gotham City in the wake of Zero Year, to investigate the Joker. He ignores his colleague's warnings, since he's spent his career chasing down war criminals and violent dictators - why fear a clown? Then when he does track down the Joker, the Joker decides to become his friend. This is a dark, and wonderfully unsettling horror story that absolutely nails why the Joker works: he's supposed to be funny, he's just very scary at the same time. Despite being an "Endgame" tie-in, I'm pretty sure anybody could enjoy this book on its own. It's great stuff, further cementing James Tynion IV's position as heir apparent to Scott Snyder's Batman crown. (5/5)

The jump back up in quality that I was waiting for finally kicked in, as Batman uses Catwoman's intel to take down a whole raft of super-villains at once - but who benefitted in the end? Things also seem to be finally starting up again for Jim Gordon over in Blackgate Penitentiary - it did feel for a while as if his incarceration had been forgotten by the story at large. Tim Seeley's back on form this week, and the artwork by Andrea Mutti seems effective enough. Interestingly enough, thanks to both DC's line-wide relaunch in 2011 and this book's weekly schedule, Batman Eternal just became the highest-numbered book of the entire DC Universe. (3/5)

Repeated delays in grabbing copies of this parallel universe thriller has often prevented me from reviewing this book in 2014, which is a shame: it's one of the best science fiction books on the market. Rick Remender is telling a densely-packed, complex story, while Matteo Scalera's artwork is absolutely stunning. How he's illustrating a monthly American comic book and not some lavish French graphic novels instead is beyond me: Europe's loss is the USA's gain. With Hugo Award nominations coming up soon, more sci-fi fans should track down and sample this excellent comic. (5/5)

This is, once again, a beautifully slick and well constructed superhero comic. The main storyline sees Matt Murdock get hired by a retired stuntman whose identity is being stolen by a new stunt motorcyclist. In true Mark Waid form, the real facts of the case only get more complicated as Daredevil investigates. Meanwhile the long-running character arcs bubble away in the background, with new developments dropping in with jaw-dropping precision. I really don't understand how someone can make writing a monthly comic book look so effortless and easy to read. Chris Samnee's simple artwork is, as always, tremendously effective. This comic really does get taken for granted. (5/5)

This is a stunning Doctor Who comic, pretty much perfectly crafted for the hard-core fanatic. Why? First up there's the actual plot, in which timey-wimey shenanigans sees the Doctor living his latest adventure backwards from epilogue to prologue. At first he's confused, then he's powerless, then (of course) he's saving the day like he always does. Secondly, the issue's villain is a Nimon. They're one of the most widely maligned and mocked monsters, mainly because they looked so silly in their own TV outing (1979's "The Horns of Nimon"). Drawn without a production budget in a comic book, he's able to look as awesome as the artists wants him to - which turns out to be pretty damned awesome. Titan are publishing three Doctor Who monthlies at the same time. This volume is definitely the best of the three. (5/5)

The first storyline wraps up in this second issue. It's served to introduce the cast of characters, the visual aesthetic, the tone of the book and the overall story arc going forward. What it hasn't really done is provide a satisfying storyline in itself. Some readers will be okay with that, but with books like Batman and Daredevil on the shelves I think the standard these days is a bit higher than this. I do like the charaters and have always loved Templesmith's artwork, so I'm happy to give this one a few more issues. For now it's good, but not necessarily good enough. With this premise and talent, they should be knocking them out of the park. (3/5)

So in true "Big Two" fashion, the reasonably well-reviewed but poor-selling He-Man and the Masters of the Universe has been cancelled and replaced with He-Man: The Eternity War. It's got the same writer, and the same artist, and the storyline continues seamlessly from the last story arc of the previous book. Basically this is a sales pitch for more semi-nostalgic 30somethings to give He-Man another go. It's pretty entertaining stuff, and certainly scratches the nostalgia itch with appearances by He-Man, She-Ra, Hordak, Grizzlor, Man-at-Arms and a bunch of other toys from the early 1980s. To be honest, however, if you weren't already reading a He-Man comic, I can't imagine you'd start now just because of a new issue #1. (3/5)

Infinity Man and the Forever People #6

And now the little DC book that couldn't unexpectedly ties itself into the Green Lantern "Godhead" cross-over, in the most marginal and nonsensical of ways. This issue features a giant Infinity Man versus giant Green Lantern Darkseid construct fight - as far as I can make out purely so that the cover can make it look like Darkseid has something to do with what's going on here. This book has been cancelled, and the remaining issues are little literary carcasses, littering the shelves of comic book shops for idle completists and idiots who don't know when to stop purchasing the books. I'm an idiot, but not that big an idiot. My run on Infinity Man ends here. (1/5)

I was expecting a climax in this issue, but what I got was an unexpected epilogue instead. That's actually okay - it turns out the climax I thought I wanted wasn't actually needed. This has been a fascinating science fiction comic book that start a little bit uneven, but which developed into an intelligent and mature post-apocalyptic story of life, love and the future of humanity. I'm very sad to see it go, but it has concluded in an excellent fashion. Anyone looking for a smart SF book has a 600+ page epic available right now: get to it - particularly if you're the sort of fan who nominates comics for the Hugo Awards. (4/5)

So a quick primer, since this comic still seems to be missing about half of the readers it deserves to have. In a small country town in rural Wisconsin, the dead came back to life. They're not zombies or vampires. They're the same people - just dead, and still moving around. While one sister - a local cop - does her best to keep the peace in the quarantined town, her younger sister - secretly one of the Revived - investigates the phenomenon on her own. This is like reading a really exceptional TV series in comic book form, with Mike Norton regularly providing the sort of clean, readable art that used to be the hallmark of DC Vertigo. Tim Seeley's writing is thoughtful, regularly creepy and occasionally out-and-out balls-to-the-wall horrifying. It's the best horror comic on the market, and each issues seems just as good as the last, and if you have any interest in quality mature comic books with strong, believable protagonists you should already be reading this. (5/5)

After a three-issue sojourn into the courtroom, She-Hulk returns to the over-arching "Blue File" storyline with a big fist-fight. A really big fist-fight. It may even cross state lines in a single punch. This issues passes one of the best tests for whether or not a superhero comic is well written: I have no idea who the villain is that She-Hulk is fighting, but the issue is written in an entertaining-enough fashion that I actually don't really care. It's big, silly, and enormously fun - not to mention occasionally very surprising. (4/5)

Winner of the Week: For superheroes, Batman Annual. For independents, Revival.
Loser of the Week: No one should be reading Infinity Man and the Forever People. Life's too short.
Posted by Grant at 11:16 PM