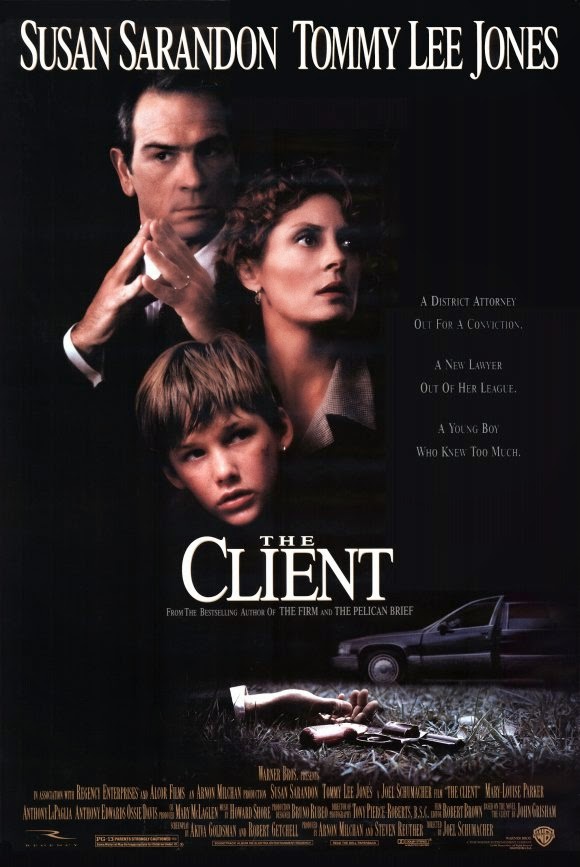 For a while there John Grisham was the biggest thing in Hollywood, with Hollywood's studios paying millions of dollars apiece to have a chance of adapting one of his novels to the big screen. They attracted top-of-the-line talent as well, whether it be Alan J. Pakula directed Denzel Washington and Julia Roberts in The Pelican Brief, or Sydney Pollack directing Tom Cruise and Gene Hackman in The Firm. At the height of the Grisham craze, Warner Bros and Regency Films co-produced The Client, a legal drama directed by Joel Schumacher and starring Tommy Lee Jones and Susan Sarandon.

Oh Joel Schumacher. For a generation of comic book fans he will always be, first and foremost, the widely derided director whose two Batman movies in 1995 and 1997 brought a hugely successful movie franchise to its knees. To more widely viewed movie viewers he's a much more interesting director; capable of both good films and bad, somewhat unpredictable, and with an eye for fresh talent that remains unparalleled in Hollywood. At his best, he's capable of directing something like Falling Down. At his worst, something like Batman Forever. In between, there are films like The Client: efficient, slickly produced, very well cast, and almost entirely by the numbers.

I mentioned Shumacher's gift for casting newcomers: in this case he uncovered Brad Renfro as a trailer-park youth who witnesses the suicide of a mob lawyer, and who is subsequently pursued by both the FBI and the lawyer's former employers. He hires a local, somewhat broken-down lawyer (Susan Sarandon) to protect him from the overzealous FBI lawyer (Tommy Lee Jones) who has one eye on a future governorship. Renfro is outstanding. Sarandon and Jones are predictably excellent. They're surrounded by a who's-who of talented supporting actors: Mary Louise Parker, Bradley Whitford, Anthony La Paglia, Will Patton, J.T. Walsh, Ossie Davis and numerous others.

Sadly the cast is the film's only real draw card. It's directed well enough, although it's cursed by an overly involved musical score - the bane of mid-1990s Hollywood. Schumacher did much better work in other films, however, including another Grisham adaptation (1996's A Time to Kill). In all honesty it's the story that lets it down: too dull and formulaic to really grab one's attention, and not quite exciting or dramatic enough to make it seem like the film was worth the bother. Put simply: this film is an assembly of some wonderful talent both in front and behind the screen, but it's not anybody's best work.
Posted by Grant at 4:31 PM