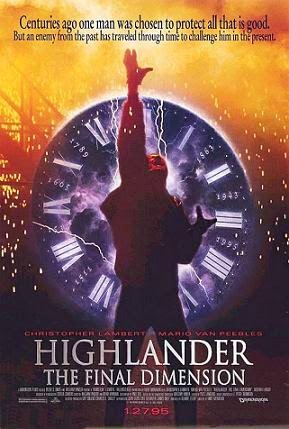 On 27 January 1995 Highlander: The Final Dimension was released in American cinemas. It was the third film in a franchise that started back in 1986. Now the original Highlander was not a significant hit when it was released into cinemas. The fantasy adventure starred Christopher Lambert and Sean Connery as immortal swordsmen in 16th century Scotland and present-day New York. While the film only grossed $12 million dollars on its theatrical release, it became a cult hit on home video.
This led to a 1991 sequel, Highlander II: The Gathering. Lambert, Connery and director Russell Mulcahy were dragged back somewhat unwillingly via sequel clauses in their original contracts, and the sequel’s producers (who had no participation in the original film) diverted considerably from the established back story with a science fiction tale of global warming, time travel and alien planets. Mulcahy famously left the film’s premiere in disgust after 15 minutes, while Lambert unsuccessfully attempted to quit the film altogether while it was shooting. Highlander II made more money than Highlander, but it also cost more money: in the end both films sat as a curious movie franchise where neither instalment had actually turned a profit.

Cut to 1993, and to Hollywood mini-studio Miramax Films. Miramax, established by brothers Bob and Harvey Weinstein, was in the middle of an aggressive expansion. Through its genre film branch, Dimension Films, the company had been pushing the career of Christopher Lambert with some enthusiasm. He headlined their 1993 science fiction thriller Fortress, and had starred in subsequent action films such as Gunmen (1994) and The Road Killers (1994). At the same time the company was strategically working towards building several genre movie franchises, which could be relied on to generate income on an annual or bi-annual basis. They had already made tentative attempts with Hellraiser III (1992) and Children of the Corn II (1993), and their 1994 action film The Crow had been envisaged as a starring vehicle for Brandon Lee before an on-set mishap resulted in his death (the company would attempt to relaunch The Crow in 1996 with a different actor in The Crow: City of Angels). When the opportunity came for Miramax to secure the rights to the Highlander franchise, it seemed a reasonable proposition – as long as costs could be kept in check and Christopher Lambert was willing to return.

As it turned out, Lambert was perfectly happy to return – so long as the new film completely ignored the widely loathed Highlander II and acted as a direct and independent sequel to the first film. Russell Mulcahy was not interested in returning to direct, and so the hunt was on to find a replacement. Mulcahy had been found in the music video industry, having famously shot a string of popular videos for British band Duran Duran. A similar search uncovered Andy Morahan, whose acclaimed music videos had accompanied songs by George Michael, Michael Jackson, Elton John and Guns’n’Roses. The story was developed by Brad Mirman and Highlander producer William N. Panzer (then supervising a successful TV spin-off of the franchise for cable television). Mirman’s original screenplay differed considerably from the final shooting script. Flashbacks took place in Scotland and England, as opposed to France and Japan. The original script also prominently featured MacLeod’s 16th century wife Rachel (Sheila Gish) in flashback sequences. Also set to return was Jon Polito as Walter Bedsoe, the police detective who investigated MacLeod in the original Highlander. Bedsoe’s scenes were rewritten to incorporate Martin Neufeld as Lt. John Stenn instead. The rewrites were undertaken by Paul Ohl and television director René Manzor (who went uncredited).

Two key roles in the new film were Kane, the violent barbarian whose return from centuries of captivity sparks the story into motion, and Alex Johnson, a modern-day consultant who bears an eerie similarity to a woman MacLeod romanced in revolutionary France. The role of Kane went to Mario Van Peebles, the son of ground-breaking director Melvin Van Peebles, and who had independently carved himself a promising career as an actor, writer and director (his own film Panther was released later in 1995). Van Peebles had previously co-starred in the Clint Eastwood drama Heartbreak Ridge (1986), Jaws: The Revenge (1987), New Jack City (1991, which he also directed) and Gunmen (1993) – where he had co-starred opposite Christopher Lambert. Alex was played by Deborah Kara Unger, an Australian-trained Canadian actor. While she had appeared in two Australian films and a miniseries for HBO (David Lynch’s Hotel Room), Highlander III was Unger’s Hollywood debut.

Several key Scottish locations from the original Highlander were revisited during the shoot, as well as new locations in Morocco. The majority of the film was shot in Quebec, Canada: Montreal stood in for New York City, with scenes set in Japan shot just outside the city.

The title was a bone of contention. It changed from Highlander III: The Magician to Highlander III: The Sorcerer, and then Dimension Films retitled it again to Highlander: The Final Dimension, dropping the sequel number and giving the film an air of finality that was perhaps (given the studio’s franchise intentions) inaccurate. The Sorcerer was used in the film’s title for international markets, including Australia and the United Kingdom.

The film received several cuts to change its MPAA rating from R to PG-13. Two sex scenes were removed, as was a shot of Kane’s decapitated head. The R-rated edition of the film was released internationally, and was released on home video in the USA. Originally scheduled for December 1994, Highlander: The Final Dimension was released in January instead, taking it out of competition with the Christmas rush.

For all of the effort involved in returning Highlander to the big screen, it’s perhaps a disappointment that the film itself is not particularly good. It’s a criticism that can, to be brutally honest, be extended to the Highlander franchise in general; a franchise that, despite everyone agreeing that it has a sensational premise, seems fundamentally incapable of resulting in genuinely good movies. This isn’t for lack of trying: at the time of writing the franchise has spun off into five feature films, two television dramas, a children’s cartoon and a direct-to-video animé. Whereas Highlander II rampaged through the original’s premise like a runaway freight train, Highlander III treads so carefully around it that nothing of note really happens. It is a sequel in the most literal of senses: things that happen occur because they happened in the original film. By refusing to take risks (understandable, given the debacle of Highlander II) the film doesn’t have a spark of originality to stimulate the audience’s interest.

Mario Van Peebles is visibly having fun as Kane, but it’s not a sense of fun that the audience can share. Christopher Lambert looks vaguely troubled that he’s in the film at all. Deborah Kara Unger is, it must be said, rather good, and certainly it’s visible from here why she was in such demand over the next few years (Cronenberg’s Crash in 1996, Fincher’s The Game in 1997, and so on).

As a by-the-numbers sequel Highlander III certainly makes the grade, but given the sheer adoration placed on the original by obsessive fans (myself included, I should note) it’s likely the film deserved more than the script, direction and performances it received. Dimension Films did distribute a fourth film, 2000’s Highlander: Endgame, without success. A fifth film went direct to video in most countries, including the USA; people who still maintain Highlander II is one of the worst films ever made should check out Highlander: The Source and get some perspective.
Posted by Grant at 8:38 PM