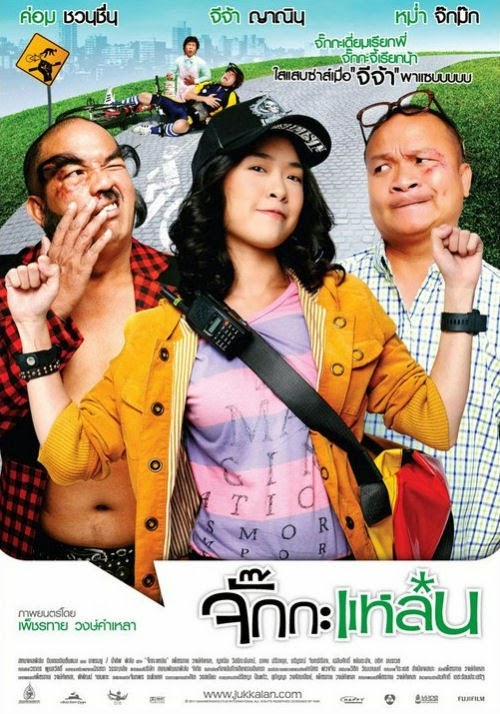 Thai actress Jija (pronounced "Chee Cha") Yanin has rapidly established herself as a rising star of international action cinema, thanks to films like Chocolate and Raging Phoenix. These movies showcased her talent for physical stunt work and martial arts, as well as a gift for comedy and a genuinely appealing screen presence. This Girl is Bad-Ass!! is her third film out of the five in which she's starred; it's a Thai action comedy written and directed by Petchtai Wongkamlao.

I really loved Yanin's two earlier films, and had high hopes for This Girl. Sadly it completely failed to engage. It's not so much an action comedy as an action film and a comedy film that each take turns to play out, scene by scene. The action segments aren't anywhere near as interesting as those in Yanin's earlier films. The comedy segments are just odd: either they're flat-out not funny, or Thailand has a particular sense of humour with which I've failed to engage.

Jija Yanin remains fabulous: she's funny, has a warm appeal, and handles herself exceptionally in the sporadic fight scenes that appear every 20 minutes or so. When Thai action films first gained international attention via Ong Bak, it was that film's star Tony Jaa who got the most attention - with many claiming he was the next Jackie Chan. I think Yanin has the better claim: while Jaa is an immensely talented martial artist and stunt performer, it's Yanin who manages to achieve similar feats while being funny as well. It's this combination of fighting off ten assailants at a time and being funny about it at the same time that makes her so appealing.

Here she's just not in the right movie. The film's focus is split between Yanin's drug-carrying bicycle courier and her reserved, awkward uncle. When the film focuses on Yanin, it's pretty entertaining. When it shifts away from her, it's nowhere near as interesting. The film drags more often than it doesn't. A few bits do strike me as genuinely funny. Other bits seem forced. Quite a few just seem flat-out weird, like a courier manager in a leotard with ridiculous fake eyebrows or a powerful drug kingpin with a squeaky cartoon character voice.

If you've never seen Jija Yanin, hunt down Raging Phoenix and give it a watch. Unless you're a particular fan of Thai comedy, or a Yanin completist, it's probably worth giving this one a miss.
Posted by Grant at 9:04 PM