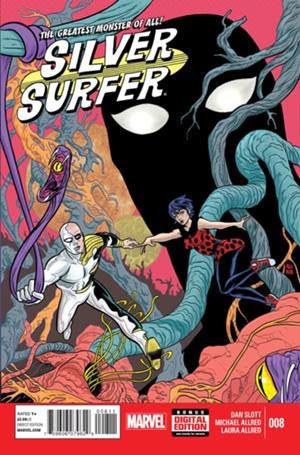 I have been enjoying Silver Surfer enormously since its reboot. Dan Slott has run with his new concept of making Norrin Radd the 'Doctor Who of the Marvel Universe', and it's delivered wonderful creative dividends. It's been a warm, silly, very slightly strange sort of light-hearted intergalactic adventure book. Michael Allred's artwork seems perfectly suited to it as well: wonderfully simple, clean and amusing to read.

I was particularly impressed with last week's eighth issue, in which the Surfer and his human companion Dawn stumble upon a hidden planet - invisible even to the Surfer's enhanced senses. Its population stem from all manner of lost or destroyed planets, all huddled together as refugees from some enormous and devastating evil power. And what power is that? Why, the Silver Surfer, of course.

It's easy to forget that the Surfer's origins in the Marvel Universe are as the Herald of Galactus. He hand-picked planet after planet to be consumed, its populations destroyed, just to save his own world. He has the blood of billions on his hands, and it's a stroke of genius for Slott to give us seven issues of old-fashioned breezy before dropping a bombshell reminder on the readership of just who it is they're reading about. And of course it's all news to poor Dawn, who was never told.

This book has been fantastic since it began, but with issue #8 Slott and Allred have absolutely turned it up another notch. This is a fantastic comic and comes with my highest-possible recommendation. (5/5)

Alien vs Predator: Fire and Stone #4

Oh let's not beat about the bush: this is a dreadful comic, and has been a pretty intolerable read for four issues. I figured I would sample all four of Dark Horse's new Alien/Predator/Prometheus titles, and with each only lasting four issues it wasn't too hard to stick it out for the whole run. This book has basically featured shouting mutated humans running around a ship shouting at mutated Aliens and Predators, and it really has been awful stuff. I'm pretty sure whatever Dark Horse do with these licenses in future, I'll be keeping a safe distance from them. (1/5)

Batgirl's new creative team continue to explore the consequences of social media on a modern-day superhero, and thus far it's providing pretty entertaining results. Barbara Gordon seems to be having a lot more fun as Batgirl than she used to, but it's coming at the expense of her actual day-to-day life. This comic continues to be a pretty dense read, with more dialogue than your average DC book and more panels per page. That makes it a much better value book in my opinion, and a lot more enjoyable to read. The artwork is, as always, adorable. (4/5)

In tracking down the nanotechnology that's taking over Gotham's teenagers, Red Robin and Harper Row bring in help in the shape of Batgirl and Red Hood - and take on the Mad Hatter. This issue felt a little bit left of field in many ways, since it doesn't really follow on from anything in the last month or so. To be honest I had sort of forgotten about the whole nanotech subplot altogether. It's an okay issue, neither brilliant nor awful. Joe Quinones' artwork feels out of place. Speculators might want to pick up an issue as it finally introduces Harper's superhero alter-ego, Bluebird. (2/5)

This issue wraps up the initial story arc, which came as something of a surprise since all the pacing thus far suggested it would run to at least six issues. The abrupt climax actually plays out as something of a strength: this is a surprising issue that gave me a resolution that I did not anticipate. As far as opening arcs go it's done rather well, introducing a set of interesting characters and pushing them off in an interesting direction. Where it all goes from this point is a mystery, but it's a solid and entertaining start for this space western. (3/5)

As the second part of a two-part storyline, this issue doesn't quite match the energy and inventiveness of the first part. That's not to say it's no good: even when it doesn't quite hit its own heights Daredevil remains one of Marvel's best comic books today. There are a few surprises; certainly the plot didn't go in the direction I expected it to. There's also some character development, and a weird sense that I can't quite pin down. It feels like something absolutely dreadful is on Matt Murdock's horizon, but I can't quite see what it is. (4/5)

Inter-dimensional tornadoes descend upon a city, and our heroes scramble to save the lives that they can. It's all brilliantly entertaining stuff, but it's the sort of brilliance that's maddening, because we're up to issue 18 and it's only getting this good now. Where was this kind of focus and energy for the past year, as this book slowed down and became less and less of a must-read? FBP has shed a bunch of readers over that time, and I suspect a fair proportion would have loved this issue. It's the classic case of bringing your A-game to the after-party rather than the main event. (4/5)

Miles' father continues his flashback story, and I don't care. It's the sort of character development that might work in a trade paperback (although I'm not sure even there it would justify 40 pages of story) but in a $3.99 monthly it just feels like tedious and unnecessary padding. The dialogue is great as always, the artwork is attractive and easy to read, but the story is just... what is the story? I honestly have no idea where we're going with this one, and not in a good way. The Ultimate Universe has crashed and burned, and it seems like this last surviving book is deliberately treading water until Marvel can segue its protagonist into the main MU after Secret Wars. (2/5)

This comic is going through the weirdest and most irritating delays. One issue ended on a cliffhanger, then there was a huge delay. Then the next issue suddenly gave us the backstory of one of the leads rather than resolve the cliffhanger. Then there was another huge delay, during which time regular artist Roc Upchurch departed the book under unhappy circumstances. Now instead of finding a new artist to resolve the months-old cliffhanger we've got this one-shot spin-off, detailing the backstory of not even another lead character but a supporting player instead. It's maddening; indeed, it's frustrating enough that I found myself half-resenting the book rather than appreciating it for what it is. What it is has gained it some considerable praise from some quarters, since it presents us with a transsexual orc. While I appreciate the representation of difference and the manner in which it's presented, I actually didn't think this issue was particularly good. Reasonable but unnecessary story, and artwork that I didn't really warm to. (2/5)

The survivors' desperate chase across the England countryside continues, pursued all the time by the strange tentacled robots. It would be redundant to spent another hundred words praising Abnett's excellent premise, so instead it's high time I praised Culbard's perfectly presented artwork. It's simple, but rich in character. The facial expressions are sensational, despite the characters all being various sorts of anthropomorphised animals. This issue is slightly less effective than previous ones, since it's probably one issue of running away from robots too many, but the art and the characters are so appealing that I don't entirely mind. (4/5)