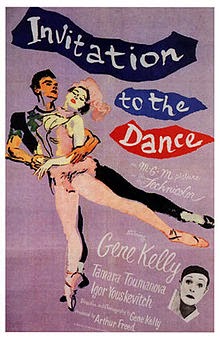 This is a review of Gene Kelly's 1956 film Invitation to the Dance, the discussion of which requires a quick primer on vanity projects.

So here we go: there's this thing in Hollywood known as the 'vanity project'. It goes like this: an actor appears in a string of hit movies, so many that the studio that produced those movies comes to see the actor as a vital asset to their ongoing business. They want to hire the actor for as many of their projects as possible. Meanwhile the actor is getting more and more ambitious: he or she has ideas of their own, and artistic projects that they become passionate about. When the studio comes to the actor with an offer to appear in their next big motion picture, the actor comes back with a counter-offer: I'll make your film, so long as you bankroll mine.

So it is that, from time to time, a commercially savvy movie studio will sink a pile of money into project for no other reason than to please one of their leading actors. It might have little or no commercial prospects. It might be a poor fit for the over-ambitious actor. It gets referred to as a vanity project, since its only purpose appears to be in appeasing someone's over-reaching self-love.

Occasionally the film might be an unexpected critical and commercial smash hit, in which case it segues from vanity project into some kind of work of genius. Some very special movie stars manage to experience both. For Kevin Costner, his 1990 pet project Dances With Wolves earned $400 million dollars and scored him two Oscars: a work of genius. His 1997 follow-up The Postman lost Warner Bros more than $80 million and scored him five Razzies: vanity project. Despite the vast difference between the two films' fortunes, I can guarantee that when they were first green-lit the studio thought they were exactly the same: collateral to keep Kevin Costner happy and starring in more studio movies.

So where, in the Dances With Wolves to Postman scale does Gene Kelly's Invitiation to the Dance wind up? It's difficult to tell. In commercial terms it was certainly the latter: a confused MGM had no idea what to do with a 90 minute portmanteau film in which all three stories were expressed entirely in dance with no dialogue from beginning to end. They left it on a shelf for over three years before tossing it into cinemas and running for cover. In critical terms it fared much better, winning the Golden Bear at the Berlin Film Festival. Today it's a pretty obscure film; it's only available via Warner Bros' print-on-demand Warner Archive service, and even Kelly's most ardent fans (myself included) have struggled to see a copy.

The film is broken into three segments, so as always it's best to run through them one by one. The first is "Circus", a classical ballet in which a clown falls in love with an actress, but she in turn loves the tight-rope walker. It's quite a sombre piece, albeit one lifted by an extended clown sequence in the middle, and it's surprising to see Kelly in such a classically-themed and serious film. I suppose this was one of his purposes in making Invitation to the Dance: to show a versatility to his acting and dancing that audience hadn't previously seen. One can imagine how MGM executives reacted upon seeing one of their biggest stars in white face paint wearing a powder-blue satin clown suit. During the aforementioned clowning sequence he excels. In the more sombre scenes of unrequited love he doesn't do quite as well, getting overshadowed by his two co-stars Claire Sombert (the actress) and Igor Youskevitch (the tight-rope walker).

"Ring Around the Rosie" tells the journey of a jeweled bracelet from one lover to another. It's a sharp contrast to "Circus", featuring quite contemporary music by Andre Previn and a variety of innovations including sped-up dance footage and stylised, non-realist sets. It's very much an ensemble piece, with each of the ten performers getting only a short scene in which to present their character - and that includes Kelly himself, who shares a great seduction sequence with Tamara Toumanova. It's a much more commercially-savvy short than "Circus", and Invitation to the Dance would arguably be a strong film if the two segments were swapped. One feels like a joy, with plenty of humour, while the other is tremendously serious and does feel at times like a bit of a chore.

The film's final sequence, "Sinbad the Sailor", sees Kelly journeying with a young boy genie into a cartoon world of Middle Eastern princesses, turban-wearing guards and fire-breathing dragons. In terms of cultural appropriation and mis-representation it's a bit of a minefield, although in its historical context it's wonderfully entertaining. Early scenes see Kelly playing the stereotypical American tourist, more interested in collecting tacky souvenirs than actually experiencing the foreign country in which he has arrived. At first the combination of animation and live-action feels like a cheaper, less accomplished copy of similar scenes undertaken for Anchors Aweigh. As the sequence progresses, however, it slowly becomes more inventive. Later scenes move beyond invention and into some kind of unwitting self-parody. Movies intentionally presenting comedy drug trips never managed things this effectively.

It's this third and final short that is the most satisfying, and to a large degree that's because it showcases Kelly doing what he does best: a sort of light-hearted muscular tap dance. The other two films here are very well produced and staged, and certainly push the American musical film in a provocative direction, but as a consequence they're less entertaining to watch. Invitation to the Dance is a fantastic production, and it's great that Kelly was given the latitude and the funding to experiment in this fashion, but in terms of his full body of work it's a comparatively difficult film with which to engage.
Posted by Grant at 10:09 PM