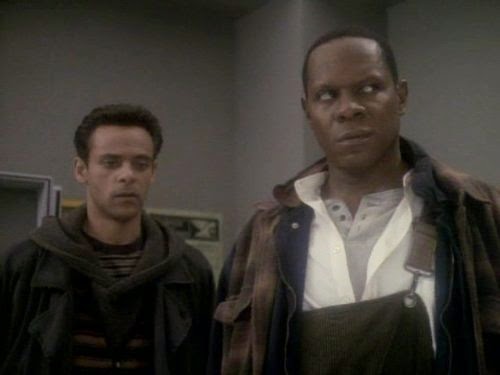 The USS Defiant travels to Earth for important briefings at Starfleet Command. Sisko, Bashir and Dax all beam down to San Francisco - only they arrive not in the 24th century, but the 21st. While their crewmates on the Defiant work to uncover what has happened, Sisko and Bashir find themselves in the centre of one of the most critical events in USA history. One wrong move could change the course of human history, leaving Sisko and Bashir with no future to which they can return.

"Past Tense" is a two-part Deep Space Nine adventure. At the time of its original broadcast I thought it was one of the best Star Trek stories ever made. Time and maturity has diminished that opinion a little, but even with the passing of time "Past Tense" is a rather effective and thought-provoking drama. It gives great story and character opportunities for Sisko and Bashir - and to a lesser extent Dax - and it does what Star Trek was originally made to do: tell allegorical stories about contemporary issues through the comfortable veil of science fiction.

In many ways it feels remarkably prescient. Back in early 1995 I thought it presented some kind of worst-case future scenario, where the US government rounded up innocent people - in this specific case the unemployed - and placed them in indefinite, hopeless detention. I remember thinking how lucky it was that such a thing would probably never happen. 20 years later, and with several thousand innocent refugees held indefinitely in Australia's detention facilities, "Past Tense" seems to have got the issue correct and just the details wrong. This contemporary relevance helps give the episode an edge it loses by being a bit too earnest and on-the-nose in the first place.

The episode is a brilliant showcase for Avery Brooks as Sisko and Siddig el Fadil as Bashir. For the former, it's the chance to get really angry and passionate about something that matters. For the latter, it's the opportunity to show a more mature and down-to-business personality that we normally get. The character of Julian Bashir has struggled in Deep Space Nine's early years as the writers have shifted him from gormless sexual harrasser to professional doctor. Here it feels like that transition is finally complete. Bashir gets to be a competent military officer, a medical practitioner and a man with a strong ethical centre. 'How did things get so bad?' he asks Sisko at one point. Sisko, and of course the writers with him, don't have an answer.

Another aspect of the episode that appeals is its historical setting. With a time-travel story there's an obvious temptation to send the characters to the present day, or even to some historical period in the 19th century or earlier. Instead "Past Tense" throws Sisko, Dax and Bashir more than 300 years into their past, but it's still all in our future. Even at the time of writing the Bell Riots aren't due for another nine-and-a-half years. It's a genuinely clever strategy.

That said, it's not all perfect. Dax gets effectively sidelined for the entire first episode, escaping detention by the charity of a local dotcom millionaire but not really contributing anything else until she breaks into the "Sanctuary District" to join Sisko and Bashir in the second half. There's also a fairly weak subplot throughout the second episode in which O'Brien and Kira beam down into different historical periods in the hope of finding the missing crewmates. It's performed for comedy, and in isolation is somewhat effective, but when contrasted with homeless people rioting and the police coming in shooting innocent civilians it's badly out of place.

All up, it's a great two-part story. It tells a rather old-fashioned kind of Star Trek adventure, one that Deep Space Nine has by-and-large avoided up to this point. I think that's part of why it felt so refreshing. Two more good episodes leave us with nine good episodes out of 12, and a quality ratio of 75 per cent.
Posted by Grant at 8:43 PM