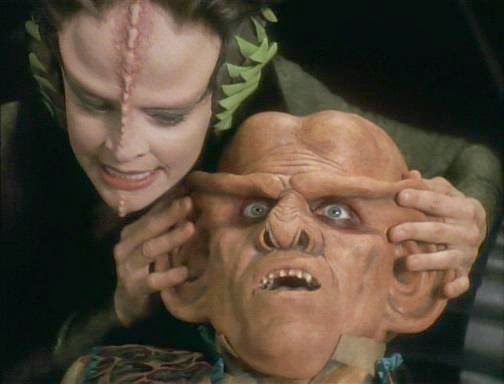 Grand Nagus Zek (Wallace Shawn) returns to Deep Space Nine, moving into Quark's apartment and selling all of his furniture. He has had an unexplained change of heart, rewriting the Ferengi Rules of Acquisition and declaring a new age for his civilization: no more capitalism, in favour of complete altruism. While Quark (Armin Shimerman) struggles to understand what has gone wrong, Dr Bashir (Siddig el Fadil) finds himself nominated for a prestigious medical award.

It is time for one of Deep Space Nine's periodic Ferengi episodes, which also means that it's time for the series to attempt another comedy. Sometimes they work surprisingly well. Other times they can be a rather grating experience to sit through. Unfortunately "Prophet Motive" is firmly in the latter category. Its cast give it their all, and demonstrate superb comedic skills. It's all for nothing when the script doesn't work.

So it transpires that Zek used a Bajoran Orb collected from the Cardassians to visit the Prophets inside the wormhole and beg them for knowledge of the future, and they in turn decided they didn't like his aggressive greed and changed his personality to something less antagonistic. It's a complicated set-up for what is basically an extended joke of seeing a Ferengi give away all of his worldly possessions and be incredibly nice and considerate to everybody. Wallace Shawn deserves better than what he's given. Armin Shimerman and Max Grodenchik (as Rom) do excellent work, and create most of the episode's funniest moments - but they're all in the performance, with the script really letting them down. It's simply not very funny.

The subplot involve Bashir being nominated for an award he has no chance of winning, and yet he slowly convinces himself that he's in with a chance. He isn't. The most interesting part of this episode is that it's essentially based on a true story: in 1993 Star Trek: The Next Generation was nominated for an Emmy for Best Drama. While no one seriously expected the series to win, the same process happened: day by day the production team began to convince themselves that it was somehow The Next Generation's year. Sure enough, when the awards ceremony arrived, both The Next Generation and the expected winner NYPD Blue lost out to the left-of-field Picket Fences. It's actually quite clever of them to adapt the experience to a Star Trek episode, and it's reasonably amusing - but not enough to save the episode.

I suppose they can't all be winners. We're 16 episodes in, and this is only the fourth dud: I'll happily watch a show with those odds. The quality ratio drops to a very solid 75 per cent.
Posted by Grant at 11:45 AM