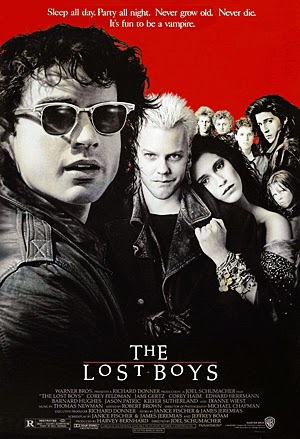 As a director Joel Schumacher fascinates me. I'm not sure there's another director whose films straddle such a vast distance in quality, whether exceptional (Falling Down), really good (A Time to Kill) through to flawed (Flatliners), dull (Dying Young), flat-out awful (Batman Forever) or even wildly misunderstood (Batman and Robin, no really). It makes each of his films a real gamble to watch: are you going to get a Phone Booth (entertaining) or a Trespass (really not entertaining)?

On this broad scale, The Lost Boys sits somewhere in the upper middle. It's not a faultless film by any stretch, and its 1987 production has allowed it to date rather significantly, but its a very entertaining teen horror movie with a lot to recommend. I've always suspected the film is a lot like Richard Donner's The Goonies. If you saw it at the right age you will absolutely love it, but if you saw it too late then you'll probably wonder what all of the fuss was about.

The Emerson family - divorced mother Lucy and teenage sons Michael and Sam - move to the Californian seaside town of Santa Carla. It appears to be the murder capital of America with a growing number of disappearances. Michael falls in with the wrong crowd, and Sam learns the town's secret: a gang of vampires is preying on them all.

There are two areas in which Joel Schumacher seems to constantly excel. The first is in his use of popular music. He - or, at least, his music supervisor - has a real knack for choosing contemporary pop songs to accompany his pictures. Batman Forever is a great example. Overall I think it's a dreadful film, but it's soundtrack album was fantastic. The music is similarly good here. There are some strong cover versions, some original numbers, and a pitch-perfect main theme in Gerard McMann's "Cry Little Sister". That said there's also some unintended comedy with a beach party early in the film. Nothing dates the film in the mid-1980s more than the sight of pop singer Tim Capello, cameoing with his trademark ponytail, bare chest, body-builder muscles and saxophone. I mean come on. He's oiled for God's sake.

Schumacher's other great strength is casting. He has an unparalleled ability to grab young actors right at the point when their career is about to skyrocket. In this case he achieves it with Jason Patric, playing Michael, and Kiefer Sutherland, playing the vampire gang leader David. While Patric is certainly competent in his role, it's Sutherland who makes a remarkable impression. He has the perfect combination of humour, charisma, rage and disdain. He's a great villain because he's a villain we like. The film also famously united the "two Coreys" - Haim and Feldman - who would continue to co-star in a number of films including License to Drive and Dream a Little Dream.

Outside of the music and the cast, the film is actually rather by-the-numbers. The set-up is well played, as are many of the events of the middle act, but things fall apart somewhat during the film's cliché-ridden climax. There are a lot of allusions to Peter Pan, although thankfully not so much that it's too on the nose. Early versions of the screenplay had the characters all named after Peter Pan's cast - Lucy as Wendy, David as Peter, and so on - but thankfully those were written out by Jeffrey Boam in his rewrite. It does feature some great wrinkles on the traditional movie vampire: young punks rather than elegant middle-aged men, their sleeping upside-down like bats during the day, and most importantly a sense than being a vampire could be anarchic fun rather than a centuries-long torture. In many respects the film prefigures later riffs on vampire folklore like Buffy the Vampire Slayer. Indeed it's difficult to imagine Buffy's Spike existing without David leading the way ahead of him.

It's difficult to know how to assess The Lost Boys. In many respects it's a genuinely fun film, but in many others it's rather ordinary. It's certainly one of the touchstones for 1980s movie nostalgia, but it's also dated very firmly in the 1980s. I think the most depressing aspect of the film, looking back on it from 2015, is that there's enough brand recognition here and enough iconic moments that someone somewhere in the Warner Bros machine has to be looking at it right now, formulating plans for a remake. We almost certainly don't need one.
Posted by Grant at 9:20 AM