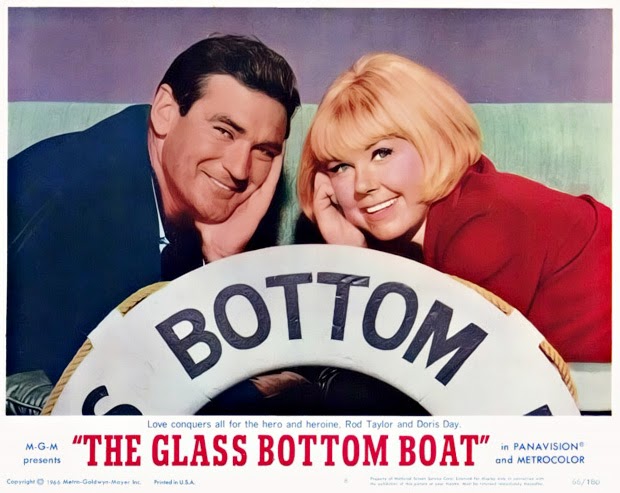 For a while in the 1960s Doris Day was America's most popular movie star. She appeared in numerous hit films from the early 1950s and simultaneously managed a highly successful musical career. Despite this prolonged success I've seen comparatively few of her films. Popular films like Calamity Jane or The Man Who Knew Too Much? Sure. Later non-musical comedies? Not so much.

The Glass Bottom Boat is a 1966 romantic comedy in which Day plays Jennifer Nelson, a public relations officer at a NASA aerospace laboratory. She attracts the attention of leading engineer Bruce Templeton (Rod Taylor) and a romance soon blossoms - despite the laboratory's chief of security (Paul Lynde) suspecting that she is a Russian spy. The film's seemingly unrelated title comes from the tourist boat that Jennifer's father pilots in Catalina, for which Jennifer occasionally pretends to be a mermaid to entertain his customers.

It is hard to know how to respond to this film. It's corny as all hell, with predictable laughs and comical hijinks, not to mention some weird science fictional ideas of what NASA might be developing in its laboratories. Templeton has apparently discovering how to manipulate gravity, and is planning human missions to Venus (this film pre-dates the Apollo landings by three years). He has also kitted out his home kitchen with computer-controlled ovens and a cleaning robot. It's all rather twee and immensely silly.

The film includes a major subplot regarding Russian espionage in America, featuring an energetic performance by Dom DeLuise. It's understandable that such a subplot would exist, given the overwhelming success of spy movies at the time, but it does feel bluntly tacked on and gets in the way of the romantic comedy on more than one occasion.

Director Frank Tashlin made his name directing popular but pretty awful Jerry Lewis comedies, as well as a few gems like Will Success Spoil Rock Hunter. I suppose this is one of his better films, but that's mainly because the profoundly irritating Lewis isn't around to completely spoil the movie.

So if the script is silly and corny, and plotted in a haphazard fashion, and the direction is a bit underwhelming, and it all feels a bit overcooked and undercooked at the same time, why watch this film? It's the actors. Doris Day was a phenomenally popular actor for a reason: she's immensely warm and engaging here, with great comic timing. She's not doing anything that doesn't get done in hundreds of other old-fashioned Hollywood comedies, but she simply does it with an effortless talent. She is soaked in charisma. Rod Taylor is similarly likeable, with an ease about him that makes his and Day's romance very entertaining to watch. He always was a strong, underrated Hollywood star, and of course one of Australia's great successes. It always seemed a little sad how his own country seemed to forget he had ever existed. He died a few days after I watched this film; perhaps in hindsight Australian audiences will rediscover and re-assess his films.

The Glass Bottom Boat was Day's final hit movie. By the time of her next film, 1967's Caprice, American pop culture had moved on from her wholesome image in favour of edgier, less corny fare. It remains a film very much of its time, enjoyable for those already keen on the genre and the period but otherwise hardly worth tracking down. One pleasant surprise is on the Warner Bros DVD release: Chuck Jones' Oscar-winning animated short The Dot and the Line is included as a special feature. I'm not quite certain as to why: I suppose it had to go somewhere, and an MGM romantic comedy is as good as any other option.
Posted by Grant at 8:57 AM