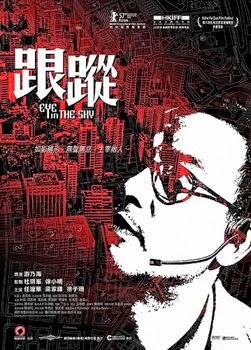 A crew of armed robbers undertake a series of meticulously planned jewel heists, led by the anonymous "Hollow Man" (Tony Leung Ka-Fai). At the same time an under-confident recruit, code-named Piggy (Kate Tsui), is inducted into one of Hong Kong's police surveillance units under the tutelage of team leader Dog Head (Simon Yam). As the surveillance team begins to track the robbers, Piggy's resolve and talent is sorely tested.

Eye in the Sky is a 2007 procedural thriller produced and set in Hong Kong. It is produced by Johnnie To's acclaimed Milkyway Image production company, which automatically brings with it a certain aesthetic and tone. This consistency is not a surprise, since Eye in the Sky marks the directorial debut of Yau Nai-Hoi - the screenwriter who wrote or co-wrote many of To's own films. The film features several regular Milkyway performers, including Simon Yam, Tony Leung, Lam Suet, Maggie Shiu and Cheung Siu-fai. It is an impressively packaged, tightly edited thriller that sits comfortably among Milkyway's stable of similarly entertaining thrillers. Despite echoing numerous other great films, however, Eye in the Sky doesn't quite manage to achieve the same level of quality. This leaves it as a minor work in the company's canon; entertaining enough for fans of Johnnie To to track down, but not so good as to demand a more large-scale audience.

The film's biggest problem is its length. At 90 minutes including credits there is precious little time to develop the character or provide more depth to the storyline. As a result there's a constant feeling of being slightly short-changed. There's huge potential in the film's premise - a police surveillance unit versus a criminal mastermind who conduct surveillance on his own heists - but that potential is never quite achieved. The film's climax in particular suffers from being badly truncated. There's a weird jump from investigating the robberies to investigating a kidnapping, which then immediately jumps back to investigating the robberies. It's a sort of plot development where you can see what Yau was attempting, but it simply fails to satisfactorily pull together.

The film's cast are excellent, particularly Sam Yam playing a quite shabby, overweight surveillance expert (his name's Wong, but everybody calls him Dog Head) and Tony Leung Ka-Fai playing the Hollow Man. Leung is coldly efficient and ruthless, but also unexpectedly charming in the most threatening of ways. Kate Tsui makes a very strong debut here as Piggy, Dog Head's latest recruit, and certainly it's always good to see a thriller like this base itself around a female protagonist. Such films still feel rather rare.

It's all rather frustrating in the end. David M. Richardson's editing is tight and suspenseful, and it's accentuated by a brilliant rising score by Guy Zerafa and Dave Klotz. It all has the look and feel of a Milkyway Image thriller, but in the end it's simply not quite good enough. The film's climax is particularly irritating, delivered in an abrupt stop-start fashion with a deus ex machina kind of an ending. It also pulls its punches to an extent, which is not something I expect from this production company. I suppose in a way I've been spoiled: from another producer this might have seemed entertaining and clever, but in Johnnie To's hands it's simply not as good as it should be.
Posted by Grant at 9:15 AM