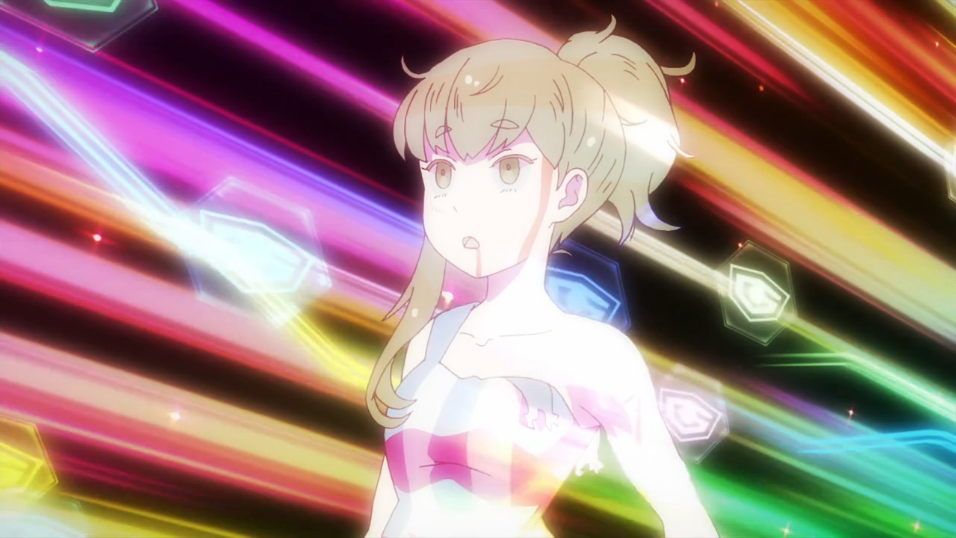 Time for the sixth episode of Gatchman Crowds. In the tunnel collapse, Utsutsu risks her life to heal the injured motorists, while Hajime reveals her identity to Rui - and, by accident, the entire city via news coverage of the disaster. It all leads up to two important questions: why should the Gatchaman continue to hide in secret, and with the advent of GALAX is there a need for Gatchaman at all?

A core conflict that was hinted at last episode comes to the forefront in episode 6. On the one hand, the world is defended from alien incursion by the elusive Gatchaman. At the same time Rui's volunteer army Crowds, developed with GALAX, appears to be doing as good as job with saving people from harm - if not even better. So why should the world bother with both of them?

This episode feels like it's been a long time coming. At first Gatchaman Crowds seemed a weird series, as if we were being forced to watch two unrelated shows at once. Now that they've been forcibly jammed up against one another it makes a lot more sense. It's a risky move, however, since by contrasting Gatchaman with GALAX the series runs the risk of shooting itself in the foot. It's kind of like when a writer tries to tackle the question of why Superman spends all of his time fighting muggers and giant robots in Metropolis when he could be stopping all wars and ending world hunger in a day. The answer is because such a move would cause the entire structure of the Superman narrative to collapse: it only works if we don't think about it too much. The same goes with Gatchaman: if Crowds keeps poking holes in the franchise's premise, it could potentially sink the franchise.

In terms of the actual nuts and bolts of this individual episode, it's a great one. There's a fantastic sequence halfway through where Hajime agrees to meet with Rui, but gets mobbed by journalists looking to interview her about being a Gatchaman. Rui sends in crowd-sourced GALAX players to help, leading to a clever and highly entertaining sort of chase sequence. The climactic conversation is great, with Rui demanding that the Gatchaman retire and allow GALAX to take over protecting the Earth - and to be honest Rui has a good point. A team of five superheroes can't be everywhere. GALAX actually can.

There's a lot to be developed going forwards, so it seems as if Crowds is about to get really interesting. This was the fifth good episode out of six, giving the series a quality ratio of 83 per cent.