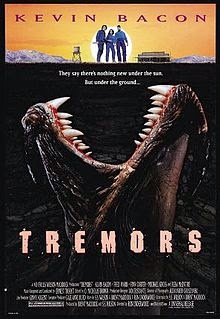 It's Nostalgia Time, my semi-regular but pretty frequent celebration of the pop culture anniversaries you should be observing each day. For Australians today might be worth observing for the 40th anniversary of youth radio network Triple J (originally Double J), but for proper cult film geeks today is best spent celebrating the 25th anniversary of one of the best pulp sci-fi movies of the last few decades: Tremors.

I think Tremors is the perfect cult film, because it's the kind of movie that got largely overlooked and dismissed upon release, but which has developed a keen fan following via home video and late night broadcasts. Don't get me wrong: the film earned money, but most people watched it and forgot it, without realising how fun it actually was. The first time I saw it was on an in-house video channel in a hotel while on holiday. I certainly didn't forget it, and when I finally bought a bluray player it was one of the first films I purchased.

Tremors stars Kevin Bacon and Fred Ward as Val and Earl, two lazy handymen in Nevada who stumble upon deadly burrowing monsters under the ground. These 'graboids' are attracted to vibrations, dig through the Earth and eat whatever the find on the surface: animals, people, cars, buildings. Before long the population of the small town of Perfection are climbing onto the highest objects they can find to avoid getting killed.

It's a slightly silly premise, but the film is smart enough to be funny. It's a great, unpretentious monster movie where your heroes aren't gun-toting cops or hardened war veterans, but instead driving pick-up trucks and have names like Earl. While never a commercial hit, the film was popular enough to inspire several direct-to-video sequels and a short-lived television series.

Tremors was directed by Ron Underwood. It was his first feature film, and arguably remains his best film. Some of his later films were pretty good, such as Heart and Souls and City Slickers. Others weren't so entertaining, particularly his disastrous Eddie Murphy sci-fi comedy Pluto Nash. Of late he's been directing a lot of television: Agents of SHIELD, Once Upon a Time, Grey's Anatomy and a bunch of others.

If nothing else, Underwood secured a place in my esteem just with Tremors. It's an awesome, funny little sci-fi/horror blend of a style Hollywood could afford to make a little more often.
Posted by Grant at 7:33 PM