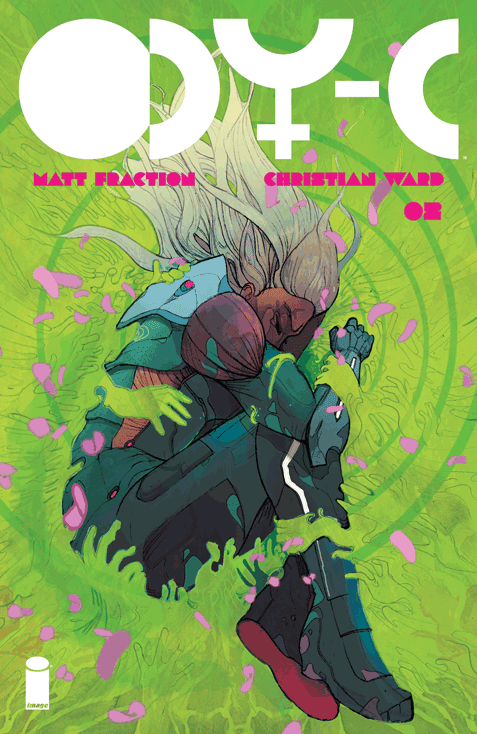 Now that we're two issues in, I'm willing to call ODY-C as 2015's first must-read comic. It is Matt Fraction's gender-swapped science fiction retelling of Homer's Odyssey, illustrated by Christian Ward and published via Image Comics - pretty much the destination of choice for any comic book-reading science fiction enthusiast.

It's a challenging read. The artwork is vivid to the point of chaos. The story is almost entirely narrated in prose captions, and those captions have been written in a vague sort of free verse. I suspect there are a lot of readers who will simply find this book to hard with which to engage, too hard to get immersed in the story, and in many ways too hard to actually like. This is, for all of its sci-fi bells and whistles, a surprisingly accurate adaptation of Greek mythology. It's blunt, brutal and regularly cruel. Petty-minded gods play games with the lives of mortals, and those mortals do not hesitate to destroy what's between them and their goal.

There's some beautiful science fiction going on here, however, with this issue revealing precisely why there are no men in ODY-C's universe. It's wonderfully clever stuff, as are all the tiny details revealed in Odyssia's adventures in the home of the Lotus Eaters.

This is an important book; not simply because it's brilliantly written and illustrated, but because there is a boldness to what is being attempted here. Rather than simply tell a conventional comic book story Fraction and Ward seem to be willing to push some boundaries in terms of what a comic book can be like. It's early days, obviously, but after the first two issues ODY-C is shaping up to be a furiously inventive masterpiece. (5/5)


DC Comics. Written by Greg Pak. Art by Aaron Kuder and Jae Lee. Colours by Will Quintana and June Chung.

My opinion of earlier issues in this arc are pretty much identical to my opinion of this latest episode. Greg Pak's writing is still solid, with a good supporting cast and strong characterisation. Aaron Kuder's artwork is attractive and distinctive. My problem is pretty much with genre: this issue continues running with Chthuloid horrors from another dimension, and I'm just not sure how much I enjoy reading a Superman comic with this kind of a story. Not a criticism, just an observation of taste: the score reflects how much I enjoyed the issue, rather than how good or bad it actually was. (2/5)

I'm just going to quietly slide this one in here; it was the only comic book from 31 December that I picked up. In this issue Batman heads up the mountain (who knew there was a mountain range near Gotham City? I certainly didn't.) for a conversation with the Riddler. It's beautifully characterised, using the revised, slightly sharper version of the character seen in "Zero Year". Meanwhile Vicki Vale gets a pep talk from her editor that was a lot more interesting than I expected it to be. All up this was a really high quality issue of Eternal with which to wind up the year. I particularly liked Felix Ruiz's rough, scratchy visuals, and do wonder if that cover is a major clue as to the identity of whoever masterminded this expansive plot against Batman. (4/5)

This issue is very much a companion piece to the last, with Batman doggedly preventing the Riddler's escape - he wants nothing to do with the entire plot, and refuses to help Batman stop it. Vicki Vale is in the fight for her life. Meanwhile a group of Arkham escapees are given all of Batman's stolen weaponry, which doesn't bode well. This issue evens finds room to push Catwoman closer to the new status quo of her monthly title, while reminding us that the Spoiler is still out there as well. That's all pretty busy, but it's the kind of busy that really works for this kind of book. Solid art once again, and a book that appears to have overcome the latest of its repeated rough patches. (4/5)

Anarky has thrown all of Gotham into chaos, but Batman is hot on his trail. While I've always been aware of the character of Anarky I've somehow always managed to avoid reading any of the Batman stories that featured him. As a result I can't really comment if and how the character has been redeveloped for the New 52. As it stands he seems to be a pretty entertaining riff on the whole Anonymous phenomenon, and it's certainly shaping up to be an intriguing storyline. It all boils down to where it goes from here. (3/5)

Booster Gold and Blue Beetle continue to scramble incompetently around the 31st century. Meanwhile the Flash of the year 3000 stumbles upon another veteran of Justice League International. This is a weird book, combining a sort of pseudo-Legion of Super-Heroes setting with a remake of Giffen and DeMatteis' beloved JLI run of some decades past. I'm not 100 per cent certain that it's working, but there's more good here than bad so for now I'm happily reading along. I do feel as if their story has lost a bit of momentum, though. (3/5)

Stan Sakai's unexpected hybrid of Japanese history, science fiction pastiche and anthropomorphic animals comes to a conclusion with this sixth and final issue. It features a rabbit piloting a giant samurai robot in a fight to the death with a War of the Worlds-style alien tripod piloted by an octopus in downtown Edo. It's as if Sakai magically wrote the comic just for me. It would be easy to trip up writing an ending like this, but Sakai manages to pull it off. There aren't too many surprises here, but what does happen is immensely satisfying and feels narratively right. There's a regular Usagi Yojimbo series kicking off in May; I think I have to finally subscribe to this wonderful book on a regular basis. (5/5)

There's a huge progression in the story with this issue that both refocuses the action and sets it off on what seems like a new direction. We're beyond the panicky early days now, where high schoolers trapped on an alien world struggle to survive against a forest full of monster. Now there's a whole city of humans who have lived here for centuries, and new challenges - and much more complicated dangers. The strong character work that's come to define this series continues - it's refreshing to see high school romantic dramas play out in both heterosexual and homosexual directions for once. This book started off with a visible weight of talent behind it, but for one reason or another never quite managed to click together. It just clicked. (5/5)