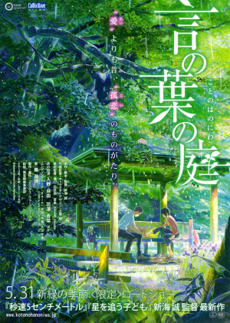 In 1999 a young animator named Makoto Shinkai single-handedly wrote, directed and illustrated a five-minute animated short titled She and her Cat. It was widely acclaimed, won a few awards, and led to Shinkai getting funding to write and direct a slightly longer piece. Voices of a Distant Star was a fantastic extended short film - it runs for 25 minutes - and saw Shinkai widely heralded as the next big creative force in the Japanese animation scene.

For a time it seemed like everyone wanted Makoto Shinkai to be the next Hayao Miyazaki, with an enormous amount of critical pressure placed on his full-length features The Place Promised in Our Early Days and Five Centimetres a Second. Now, thankfully, it seems like everyone is happy for him to instead become the original Makoto Shinkai. I think Shinkai's works, and the anime landscape in general, will be richer for it.

His most recent film is The Garden of Words, and it feels like a firm step back into the territory where he most excels. It is an odd length at 46 minutes; too long to give the quick, sharp hit of a short film, and too short to fully expand to the depth of a proper feature. One the other hand it seems the perfect length for Makoto Shinkai, and it showcases his particular, and particularly Japanese, artistic strengths.

Akizuki is a 15 year-old Tokyo high schooler who skips school to visit the Shinjuku Gyoen's Japanese garden. While there he meets a 27 year-old woman. She appears to be skipping work in order to drink beer and eat chocolate. The two make a connection, and the story develops from there.

There is a stillness and a subtlety to Shinkai's works, and that is in full effect here. This calm, deliberate quality, which is prevalent in many anime productions, closely reflects the aesthetic of classical Japanese cinema. Often this kind of effect is taken for cost reasons: it's cheaper to animate a film if lots of the shots are effectively still images. For all I know that's the case here as well, but Shinkai has written a script that does actually demand these moments of stillness. Like much of Japanese film it's filled with ellipsis; one of the reasons Shinkai can squeeze the story into 46 minutes is because he only gives us enough action to extrapolate the plot for ourselves.

He's written a love story, but it's an oddly idiosyncratic, thoughtful love story. Akizuki is 15. The woman he meets, Yukino, is 27. Clearly there's not going to be a romance between them. What there is instead is part meditation, part elegy. There's a lot of sadness here.

The animation has been produced using a surprisingly smooth blend of hand-drawn art, computer graphic and rotoscoping (animation over live-action photography). It ultimately makes The Garden of Words one of those animated films where there's ostensibly no reason for it to be animated at all. I'm glad it is, however, as Shinkai has a beautiful aesthetic that would be impossible to replicate in live-action. He draws excellent performances out of his two leads as well, particularly Miyu Irino as the troubled, complicated Yukino. This is just a beautiful film: small, well-written, sensitively performed and visually marvellous. It was also a treat to see Shinkai's representation of Shinjuku Gyoen; I was there last year and it's a beautiful park.
Posted by Grant at 8:58 AM