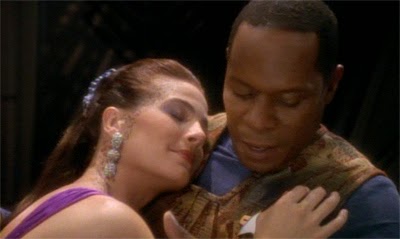 Betazoid ambassador Lwaxana Troi returns to Deep Space Nine for the Bajoran Gratitude Festival, and her arrival sparks off a complex string of unexpected romantic entanglements. Jake loves Kira, but Kira loves Bashir. Bariel loves Jadzia, but Jadzia loves Sisko. The only people who don't seem to be feeling the passion are Miles and Keiko O'Brien, who struggle to be intimate after their long-overdue reunion.

Here's the thing: Lwaxana Troi is a terrible character and she's played by a fairly poor actor. That's the hard, honest truth, and no attempts by the various writers, director and producers to make the character work have succeeded. This is her penultimate appearance in the franchise - she gets one more shot in Deep Space Nine's fourth season - and she isn't getting any better here. While this isn't the most actively painful Lwaxana episode ever produced, it is still a chore to sit through.

It is, of course, a deliberate spin on William Shakespeare's A Midsummer Night's Dream, with a Betazoid psychic virus taking the place of fairy magic but having pretty much the same effect: everybody falling passionately in lust with one another. It's awkward as all hell, and while some of the cast pull it off capably (Siddig el Fadil is a notable example) others aren't so lucky.

The episode's subplot emphasises my continued issues with Keiko O'Brien (Rosalind Chao): she's never happy. She's like that friend we've all had, who's constantly complaining about something. Their husband. Their job. The government. What's on television. The food in the restaurant you visit. The place they go to on holiday. Nothing makes them happy, and sooner or later you find yourself gently stepping away, not seeing them as often, because their constant negative attitude is beginning to inexorably drag you down. I feel very badly for Chao, who is clearly a competent actor yet keeps getting the same material to deliver.

Avery Brooks pulls double-duty as actor and director, and to his credit he manages to bring a bit more colour into the series than is usually seen. It does suit the more over-the-top, whimsical material; it's just that the material in question isn't any good. Still we're ten episodes into Season 3, and seven have been good: that's still a decent quality ratio of 70 per cent.
Posted by Grant at 9:04 AM