Doctor Who: "A Race Against Death" 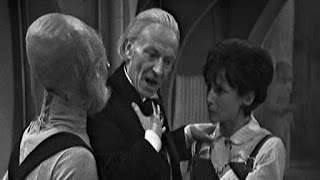 It is the fourth part of "The Sensorites". When Ian (William Russell) is struck down by the same plague that is killing off the Sensorites, the Doctor (William Hartnell) dedicates himself to finding a cure as soon as possible. While the Doctor works, the city administrator continues to conspire against him, believing all of the humans to be in league together against the Sense-Sphere. After finding a cure, the Doctor decides to head down to the city's underground aqueduct to discover the true source of infection.

Superficially it may seem as if "A Race Against Death" is just another episode of Doctor Who. There are some aliens in rubbish rubber masks arguing with one another. There are companions in peril. There is the Doctor using his scientific know-how to save the day. It all seems very by-the-numbers, and certainly from a technical standpoint it is no better or worse than any of the other episodes around it. Nonetheless "A Race Against Death" is a highly significant episode of Doctor Who. It's arguably one of the most important episodes ever made.

The reason is pretty simple. For the first six serials of Doctor Who the TARDIS has arrived in a new location, and the Doctor and his companions have promptly lost access to the TARDIS. They are trapped in their new environment, and whatever else they do for the duration of that serial their ultimate goal is to regain access to the TARDIS and escape.

"The Sensorites" began in the same fashion. As soon as they arrived on the Earth spacecraft, the Doctor and his companions found the TARDIS lock had been stolen from them. The Doctor begins this episode agreeing with the Sensorites' First Elder to find a cure to a mysterious plague in return for the TARDIS lock. By the episode's halfway point he has developed the promised cure and handed it over. At this point he could leave at any time. In fact he deliberately chooses not to, and instead forces a Sensorite to take him down to the aqueduct so that he may investigate the plague's source further. For the first time in the series the Doctor takes action not because he wants to escape, or because it will enable him to escape, but purely because it is the right thing to do.

It's not a coincidence that this is essentially the first episode in which the Doctor acts as protagonist. Susan (Carole Ann Ford) may be there as a supporting character, but Ian is mostly laid out by the plague - actually poison - and Barbara (Jacqueline Hill) is entirely absent (Hill was on annual leave). The entire decades to follow of Doctor Who, in which the Doctor is the hero and his companions merely audience viewpoints, begins here. That in mind, it is remarkable just how much of future Doctor Who echoes this early serial. The first two episodes already introduced the entire concept of the 'base under siege', and in these second two episodes we have seen an attempt at a proper alien civilization with the Sensorites portrayed - slightly ineffectually, it must be said - as people instead of monsters. These suspicious conversations between the Sensorites about whether or not humans can be trusted will be echoed through numerous future adventures.

Perhaps because it is so familiar in terms of later Doctor Who, "A Race Against Death" winds up being a really enjoyable episode. William Hartnell in particular takes command of his newly starring position and delivers one of his strongest performances so far. "The Sensorites" has been a shaky and uneven serial, but when it gets things right it really is quite effective.

With 24 good episodes out of 34 so far, Doctor Who's first series reaches a quality ratio of 71 per cent. There are eight more episodes to go.
Posted by Grant at 5:43 PM