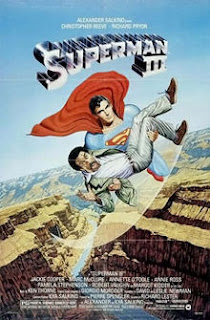 Gus Gorman (Richard Pryor) is a gifted computer programmer who gets caught trying to defraud his employer, the Metropolis business magnate Ross Webster (Robert Vaughn). Rather than prosecute Gus, Webster uses his talents to give him an illegal advantage in his business affairs, and when Superman (Christopher Reeve) gets in his way Webster uses Gus' talents to take down the Man of Steel as well.

Superman III is a real odd fish of a superhero movie. At the time it was regarded as a major disappointment following the box office success of the first two Superman films. Coming back to it more than 30 years later and it's quite a surprise. Nothing in the film comes halfway close to matching the best moments of the earlier films, but at the same time Superman III boasts a consistency of story and tone that is far beyond what either predecessor managed.

How much one enjoys the film is largely going to come down to how much they want to see a Richard Pryor comedy thrown into a blender with a Superman sequel.

Christopher Reeve does a typically sensational job as both Clark Kent and Superman. There has been a subtle shift with the character between the last film and this. It's clear that under Richard Donner the character was Superman first, and that Clark Kent was a masquerade to cover his real identity. Under Richard Lester, who replaced Donner for Superman II and works full-time in the role here, it feels as if it is the other way around. The goofy, awkward elements of Clark's personality have been toned down, and we spent a lot more time in his company than in Superman's.

It is also fun to see Reeve play at giving Superman an evil personality. One of Webster's schemes to destroy Superman involves synthesising kryptonite. Gus gets the formula wrong, and instead of killing Superman it turns him evil. The sequence culminates into Clark splitting from Superman in a junkyard, and the good and evil sides of his personality punching it out for who gets to control the body. It's a fairly bold and satisfying scene. Certainly it does not make one lick of sense, but neither did Superman's powers under Donner.

Richard Pryor essentially plays his stock onscreen character, which is either pleasant if you like his work or likely tedious in the extreme if you don't. To an extent Pryor does feel semi-detached from the film as a whole, almost to the extent that he's walking through someone else's movie. I had a similar experience when Warner Bros cast Jim Carrey as the Riddler in Batman Forever: he did his popular comedic schtick, but no real attempt was made to join him to the world that all the other characters were inhabiting.

The film has a charmingly naive fixation on computers. By 1983 the computer existed in Hollywood as some sort of magic box, capable of undertaking all manner of exaggerated and unlikely tasks. Here Gus uses computers to reprogram a weather satellite to actually change rather than observe weather, to shut down entire traffic grids across a city, and even invents one that turns self-aware and attempts to kill everyone. That final act leads to some rather unexpected moments of horror during the film's climax. They are not tonally inappropriate, but they are a surprise.

Robert Vaughn is rather charming as Ross Webster. The sort of villain he plays - a legitimate business magnate masking his criminal enterprises - foreshadows quite keenly the re-imagined Lex Luthor of the comic books, who was introduced following the Crisis on Infinite Earths miniseries. It would be interesting to know what influence Webster was on the comic book Luthor, since there seems at least superficially to be a direct line from one to the other. Vaughn is supported throughout the film by Annie Ross as his sister Vera and Pamela Stephenson as his girlfriend Lorelei. Stephensen in particular provides solid comic relief.

Balancing Webster's schemes is a parallel storyline that sends Clark back to Smallville for his high school reunion. There he reunites with Lana Lang (Annette O'Toole), the girl he loved back as a teenager. O'Toole is warm and appealing in the role, but her presence as the film's love interest weirdly relegates Margot Kidder's Lois Lane to one scene and a handful of lines. At the time Kidder accused the Salkinds, who produced the Superman films, of punishing her for speaking out against Richard Donner's dismissal. They claimed her story simply wrapped up in the second film. It's fairly hard to reconcile the Salkinds' claim with what appears on screen. If Lois' story was done, why go to the effort of bringing Kidder back at all? It's a weirdly jarring scene.

It is interesting to see, after the first two films included such elements as Jor-El and Krypton, kryptonite, General Zod and Lex Luthor, that Superman III does not introduce any comic book elements at all. It seems to hint in that direction - the faulty green kryptonite has the same effect as red kryptonite in the comics, but lacks the colour, while the evil supercomputer of the film's climax points towards comic book villain Brainiac without actually going the full distance. It is also noticeable that this film has abandoned the strangely non-committal period setting of Donner's Superman. The first film in particular seemed to occupy a deliberately vague setting where characters in 1940s fashions co-existed with those in contemporary clothes. This film is entirely set and designed for the early 1980s, and that makes it feel rather distinct compared to the other two.

Superman III is not a great film by any stretch, but it is surprising just how watchable it actually is. Christopher Reeve remains in fine form, and Richard Pryor is - for me at least - an amusing addition. While it has too many faults to properly rate as a good movie, it is the most consistent and evenly presented Superman movie so far. I for one find it oddly enjoyable.
Posted by Grant at 1:24 PM