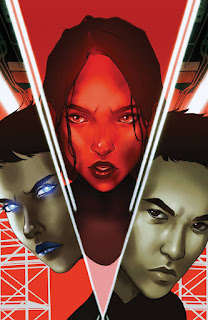 This is shaping up to be a great week for comic books: the first four comics I've read from this week's list, and all four of them are five-star issues. That doesn't happen very often.

Let's kick off with issue #3 of Venus, Rick Loverd and Huang Danlan's excellent science fiction thriller. A human mission to Venus has suffered a crippling act of sabotage. Now it's clear the saboteur is still among the surviving crew. A group of shipmates are plotting mutiny against their commanding officer, and meanwhile war appears to have broken out on Earth with a mass detonation of nuclear warheads.

This is a rather shocking issue, with Walking Dead levels of graphic violence. It's earned by the narrative, but it's a hell of a moment to have to read. It has been really impressive how well Loverd has established his cast of characters within such a comparatively short amount of time. This is a four-issue miniseries, so there is only one issue left to go. Thanks to his writing it seems entirely likely that we will get a tightly paced and satisfying conclusion by then.

Huang Danlan's artwork is a great match. It is realistic enough to make us care about the characters and the storyline, but it is also abstract enough to be a very aesthetically pleasing book too. Marcio Menyz's excellent colour art really makes it pop off the page as well.

While Image remains the go-to publisher for strong science fiction and fantasy ongoing comics, Boom Studios has really carved itself a specific niche as the home for strong miniseries. Venus is yet another excellent title to add to their growing catalogue of genre works. (5/5)

Under the cut: reviews of Batman and Robin Eternal, Saga and Wild's End: The Enemy Within.

At last we hit an issue full of answers. Answers to Bruce Wayne's secret relationship with Harper Row. Answers to the true identity and origin of Mother. It's pretty much 100 per cent flashback this week, and the book is all the stronger for it. It is interesting that sometimes a plot twist can affect a reader straight away, whereas sometimes it takes an issue or two for the implications to sink in. We knew Mother had Harper's mother murdered to transform her into the perfect Batman sidekick. In this issue we see Batman deliberately trying to make sure Harper never goes down that road, because it would mean Mother had won some sort of victory. Of course we already know Harper does go down that road, and becomes the new sidekick Bluebird. It's dramatically effective and so utterly tragic. Tony S. Daniel guest illustrates this issue, and does a stunning job of it. This is the best issue of Eternal so far. (5/5)

While I have been enjoying the sixth story arc a great deal, I have commented more than once that it all felt too disjointed: an issue with one set of characters, then a jump to another, and then another. It felt like there was simply no momentum to be found. That changes quite wonderfully with issue #34, in which all of the plot threads return for a few pages each, and at least two of them seem set for a collision course very soon. It's great to see a good comic book firing on all cylinders. (5/5)

Wild's End: The Enemy Within #6

Abnett and Culbard's wonderful blend of talking animals and alien invasion comes to its second climax. This is the bleakest issue yet. Characters die, and not in pretty ways. The situation grows grimmer with every page, leading up to one of the best shock developments I have read in quite a long time. Basically the entire 12 issues of Wild's End thus far seem to build to a single two-page spread. I adored it. The open-ended conclusion makes it clear there is a third miniseries on the horizon. I cannot wait to read it. (5/5)
Posted by Grant at 10:02 AM