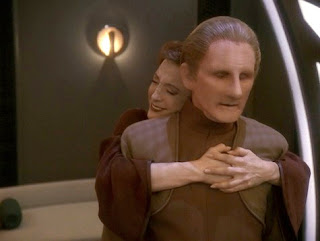 It's 29 January 1996, and time for another episode of Star Trek: Deep Space Nine.

Bajor's new First Minister Shakaar (Duncan Regehr) arrives on the station to negotiate Bajor's admission to the United Federation of Planets. An assassination plot against him is discovered, forcing Odo (Rene Auberjonois) to act as bodyguard. When he notices romance building between Shakaar and Major Kira (Nana Visitor), Odo is left with a dilemma: confess his own love to Kira before it is too late, or remain silent and watch his dreams slip away.

Odo takes centre stage in this episode, and not only dominates the story but gets put through an emotional torture as well. We have known for about a season that he harbours a deeply felt affection for Kira, so seeing his dreams shattered when she romances another man is a rather heartbreaking thing to watch. This is an exceptional episode. Since its central plot is rather slight, it fills its time with strong character work. We see Odo's relationship with Kira, with Quark (Armin Shimerman) and even with Worf (Michael Dorn). In every case the relationship is expressed in pitch-perfect fashion.

An early conversation with Worf is beautifully written and performed. When Worf first arrived on the station he was at loggerheads with Odo over how security on the station was run. This time they're discussing all the manners in which they are similar: the formal manner in which they present themselves, their obsession with schedules and routine, and their discomfort with the familiarity their colleagues sometimes show to them. It is a great scene because it draws both characters closer to one another, but it is also great because while we the audience are amused by their conversation the script is reminding us just how orderly and controlled Odo tries to be. This pays off enormous dividends later in the hour, as a heartbroken and enraged Odo completely trashes his own quarters because he knows he will never have the relationship with Kira he so desperately craves.

Odo begins the episode sharing a weekly security meeting with Kira. We watch him meticulously prepare his office for her arrival: making her a drink and positioning it precisely on the desk, and working out the most impressive pose in which to be seen when she arrives. It's rather sweet and also quite tragic, since it is fairly clear from the outset that while Odo may crave Kira's companionship he is too awkward and shy to ever act upon his desires. Their meeting emphasises a strong friendship, and is incredibly warm and joyful. As with Odo's conversation with Worf, it works on its own merits while simultaneously setting the audience up: at the episode's end Odo coldly cancels the weekly meeting, and there's a sense the friendship has been broken.

Shakaar arrives and immediately charms Kira. It is worth noting that Duncan Regehr is not quite charismatic enough to really make his character work. He is pretty much the only weak aspect of the episode, and I think to an extent it is largely down to script and direction rather than performance. The episode gets increasingly uncomfortable as Odo watches Shakaar and Kira get closer, and in turn the amount of attention Kira pays to Odo shrinks and fades away. It is not just Odo who notices what is going on; Quark can see the writing on the wall from the first official function. In the end it is Quark who steps in and has the conversation with Odo that he absolutely needs to have: pursue Kira now and be honest, or drop his amorous wants for good.

It's the best conversation in an episode filled with great scenes. Odo storms into his quarters in a jealous rage. He smashes computer panels. He breaks furniture. He picks up objects Kira gave to him as gifts and destroys them. When Quark steps in Odo is sitting on the floor. In a beautiful touch - apparently improvised by Auberjonois - a few strands of Odo's hair hang out of place: the man who prides himself on order and precision is literally falling out of place. Quark then gives Odo the hard talking-to that he needs. It's a beautiful friendship between the two characters, because of course neither one admits that an actual friendship is there. Like all great drama, the best stuff is not in the dialogue but in what is not said in between. Quark leaves Odo with a choice - tell Kira or don't - but whatever his choice he needs to pull his life together and move on.

And Odo, rather tragically, chooses to remain silent. He pushes Kira away and puts his life back in order. It's an incredibly depressing ending, because it is clear he is not moving on so much as bottling up. The passion is still there, but he has decided to internalise it completely. It is a deeply unhappy conclusion, but importantly it is a conclusion that has been earned. Most admirably the episode never makes this Kira's fault. Odo has not been 'friendzoned' by a manipulative female friend, as the awful trope often goes. He has made his own choices, and they are bad ones, but he made them of his own volition and ends the episode suffering the consequences.

This is a truly great episode, and a powerful showcase for Rene Auberjonois considerable acting talent. Nine good episodes out of 12 give Season 4 a quality ratio of 75 per cent.
Posted by Grant at 9:48 AM