Babylon 5: "The River of Souls" 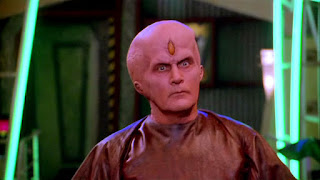 Archaeologist Robert Bryson (future Emmy and SAG nominee Ian McShane) comes to Babylon 5 with a stolen alien artefact. While the artefact begins to exert a strange psychic power over Bryson, he is followed by a powerful Soul Hunter (future six-time Emmy nominee Martin Sheen) who is desperate to retrieve it at all costs.

"The River of Souls" is an interesting made-for-television film for two reasons. Firstly, it is the first Babylon 5 storyline - outside of the series finale - to be set beyond the original five-year timeline. Secondly it is genuinely odd to see two major and widely acclaimed dramatic actors - Ian McShane and Martin Sheen - performing in a series that is considerably below the quality standards to which both men are now accustomed.

In 1998 Ian McShane was a popular British actor who had been dividing his time between playing BBC stalwart Lovejoy and making guest appearances in numerous American TV dramas like Dallas, Columbo and Perry Mason. Some years after Babylon 5 he scored one of the lead roles in HBO's Deadwood, where he played one of American television's all-time greatest characters: saloon owner and crime boss Al Swearengen.

At the same time Martin Sheen was an actor who had enjoyed some significant commercial and critical hits but had perhaps slipped a little out of favour into becoming one of those actors who would take any role for a reasonable pay cheque. Just one year after his Babylon 5 appearance he would appear as President Jed Bartlet on The West Wing: one of America's other all-time greatest characters.

It is bizarre to see both actors, each of them subsequently a major star of American television, turning up in a made-for-television movie spin-off of a science fiction cable drama. Babylon 5 has had some famous actors appear before, including Michael York, Walter Koenig and David McCallum, but it never felt quite this egregious. To his credit Sheen commits one hundred per cent to the role, creating a proper character despite his ridiculous make-up and visibly cheap costume. His Soul Hunter is so solitary and so used to be alone that it takes several minutes of talking for him to begin sounding even remotely human. His body language feels slightly odd and awkward. It is a very theatrical performance, but then given the tone of the script it seems fairly appropriate for him to take that approach.

At the same time it feels like he is slumming it somewhat. Even by the standards of 1990s science fiction television The River of Souls uses a fairly mediocre script. A fair chunk of time is dedicated to a subplot about a holographic brothel and its owner's attempts to sue both Captain Lochley (Tracy Scoggins) and the station for harassment. It is played primarily for laughs, most of which fall very flat. It's a painful sort of comedy. At one point the humour relies on a holographic recreation of Lochley in lingerie, which is flat-out awkward to watch.

The rest of the film feels like a very by-the-numbers episode of Babylon 5. The glowing orb that Bryson has stolen contained hundreds of millions of incorporeal aliens trapped thousands of years ago by the Soul Hunters. They are desperate for escape and revenge against the Soul Hunters, and will destroy the station to achieve their goal. While the details have changed, there is an unavoidable sense that we have been here many times before.

There are some highlights. For one thing it is nice to see Tracy Scoggins get a whole film to herself. She was woefully under-used in Babylon 5 itself, but with Sheridan out of the picture she manages to take centre stage and does a really good job of it. There's also more material than we've previously seen for security chief Zack Allen (Jeff Conaway) and Lieutenant Corwin (Joshua Cox). In Conaway's case it's a welcome change; in Cox's case it's perhaps less so. Corwin was an occasional supporting character in the series but never really got much focus. While he gets more time here he does not get much quality work to do, and Cox struggles as a result.

The film also works as a nice follow-up to Season 1's "Soul Hunter", offering a different and much more likeable perspective on the Soul Hunter race. There are some nice ideas played out here, particularly the idea that the Soul Hunters mistook a race evolving into non-corporeal beings - a known phenomenon in the series - for that same race dying out instead. Rather than saving close to a billion souls they imprisoned them instead. That is a strong idea, even if it does not quite get the script that it deserves.

The River of Souls is broadly enjoyable but rather limited at the same time. It does not feel like a special event or a film, but rather a longer-than-average episode of the series. It is a lot like its predecessor, Thirdspace: some good ideas, a few scenes with real atmosphere and character, but an awful lot that gets thrown away. It was weirdly scheduled as well, debuting on TNT the night before "Objects at Rest", which chronologically pre-dates it. American television scheduling remains a bigger mystery than any glowing orb or soul-gathering alien.
Posted by Grant at 11:13 PM