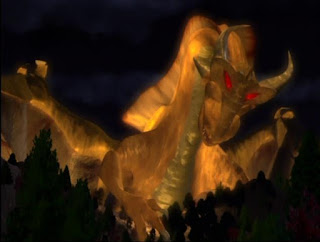 When the Earth Alliance finds a mineral deposit that may delay the effects of the Drakh plague, they immediately begin strip-mining an isolated colony planet. The local population, who have taken to a low technology life-style, rebel against the destruction of their home and take a group of Earthforce personnel hostage. Earthforce, however, is more concerned about the dragon - conjured up by a technomage (Edward Woodward) who has taken to living on the planet.

This is a dreadful piece of television. There is not a qualifier, or an excuse, or some vague explanation of 'oh but the network did this', or 'they were trying to do that'. It is just generally awful. The script by J. Michael Stracyznski is as superficial and trite as his work work back during Babylon 5's first season, and Mike Vejar's direction - usually pretty reliable - is weak and uninspired. It all looks astonishingly cheap, as if those involved had never met a television production budget before and simply figured a believable computer-generated dragon would be possible. I suspect guest star Edward Woodward - father of series regular Peter Woodward - knew he was in a bad episode, since he spends the hour over-acting and treating the entire thing as a bit of a farce. He was right: it is a farce. With episodes like this there is no longer a question of how Crusade got cancelled so much as how it managed to last thirteen episodes before it was.


The idea of a human colony that has reverted by choice to an 'olde-worde' agrarian lifestyle is a hoary old cliché, and for Straczynski to use it here without any fresh angles or ideas is just flat-out lazy. The colonists take hostages, and that creates a very by-the-numbers storyline that viewers have seen many times before. That only leads Edward Woodward as Alwyn the technomage to give the episode any kind of new ideas. He does not.

The technomages are a terrible idea. They are a weird insertion of a sort of fantasy element to a science fiction series, which is an very difficult thing to integrate well and the Babylon 5/Crusade team have simply never managed to pull it off. What's worse they are actively smug and irritating. More often than not they are a chore to watch. Including one of them in the series regular cast feels like a mistake - one exacerbated by Peter Woodward's remarkably hammy acting. Then focusing on a second technomage in the second episode just pours salt on an open wound.

I felt mildly embarrassed watching Edward Woodward, star of Callan and The Wicker Man, strut around loudly proclaiming things in a set of cheap robes like a D-grade Gandalf. It makes me want to track down Straczynski one day and ask him: you had one of the finest television actors in British history on your show, and of all the potential characters he could play you gave him that?

Technically the episode disappoints as well. It is set on a forest planet, but the entire thing is shot on a soundstage. A massive golden dragon conjured by Alwyn to scare the Earthforce mission into leaving would not look out of place in a first-generated PlayStation videogame. The costuming looks fake, less like people who spent their lives working the land without technology and more like a community hall pantomime. It beggars belief, since this is essentially the same production team that made some great Babylon 5 episodes. It's difficult to work out precisely how things went so wrong so quickly.


The episode does not feel like it has a natural fit behind the series premiere. The relationship between Gideon and Galen was tentative and uncertain at the end of "War Zone"; here it feels rather chummy. One could argue this comes down to Crusade's utterly bonkers continuity, in which the shifting of storylines up and down the schedule at TNT's behest has led to the problem that no individual order of episodes actually lines up and makes sense. As a result there is the original broadcast order, which places this episode second - as does the DVD release. Then there is the revised broadcast order set by Stracyznski for re-runs on the Sci-Fi Channel, which places this episode fourth. There is also a revised episode order developed by Straczynski and published in an official magazine, as well as a fan-created chronological order based on the sort of fastidious interrogation of background information that fans do so well. Both of those orders list this episode as second as well. With three out of four chronologies listing "The Long Road" as second, perhaps TNT's tinkering with the broadcast schedule is not at fault after all. Perhaps the characterisation of Gideon and Galen is off because, well, it's just not very well written.

Back when Crusade was being broadcast, J. Michael Straczynski was quite active on Internet newsgroups. He described "War Zone" to his fans as 'probably the weakest one'. Of "The Long Road" he wrote 'it's a favourite of mine... nice character and humor stuff'. That's a perplexing attitude to have. You could forgive him for talking up every episode, but he had only recently trashed his own pilot. It seems he genuinely believed "The Long Road" was good. It isn't. It is deeply awful. It leaves me asking: how can he not know?

One terrible episode following one reasonably enjoyable one gives Crusade a running quality ratio of 50 per cent. I really hope the third episode - which can also be considered the sixth or the twelfth - marks an improvement.
Posted by Grant at 9:48 AM