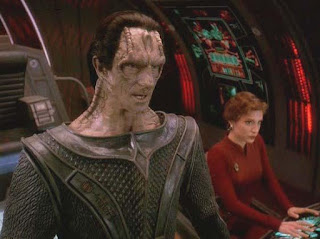 It's 5 February 1996, and time for another episode of Star Trek: Deep Space Nine.

Major Kira (Nana Visitor) is once again forced to travel with Gul Dukat (Marc Alaimo) to a Bajoran-Cardassian intelligence conference. When they discover the outpost hosting the conference has been destroyed by a Klingon bird of prey, they team up to track the enemy vessel down and get revenge for the deaths of their respective peoples.

"Return to Grace" is a direct sequel to "Indiscretion", the Kira/Dukat episode broadcast earlier in the season. It sees Dukat return with his reputation in tatters, having lost his wife, political position and social status thanks to the revelation that he has a half-Bajoran daughter, Ziyal (Cyia Batten). Despite this dishonour he seems genuinely proud of his new-found daughter, despite attempting to kill her on their first meeting specifically to avoid the fall his career has suffered. Then again, when the opportunity comes to destroy a Klingon bird of prey and restore his standing he takes it with both hands, dragging Kira along for the ride.

There is a sense both here and back in "Indiscretion" that the Deep Space Nine writers room did not fully comprehend the sort of character relationship they were making with these episodes. Dukat is clearly amorously inclined towards Kira. He tries to flirt with her, constantly praises her, and tries to engage in a sort of witty, romantic banter. Kira, understandably, is not having a bar of it. She flat-out despises Dukat, and is civil with him to the extent that her job requires her to be. That only works to an extent. The unspoken problem with both of these episodes is that Dukat was a tyrannical, loathsome despot who tortured and killed Bajorans as part of a years-long reign of terror. The script has her snapping and sniping at Dukat when on so many levels it feels as if she should be running screaming from the room. What is presented here almost works, but in the end it simply fails to convince.

The episode's other key problem is that it simply is not interesting enough. Dukat reveals he has been demoted. He and Kira stumble on the site of a Klingon massacre. They pursue the Klingons. They defeat them. Dukat remains in command of the stolen bird of prey to continue fighting Klingons along the Cardassian border. There's really not enough her to surprise or even fully engage. While it is nice to see how Ziyal has gone since her first appearance, overall it is a fairly unnecessary and throwaway episode.

The sad, gentle relationship between Kira and Ziyal is one of the episode's real highlights. It is very well acted by Visitor, who loves the daughter but despises the father, and can only sit there with a warm smile and pained eyes as Ziyal enthuses about how wonderful she thinks Dukat is. As for Dukat himself, Marc Alaimo gives a typically charismatic performance. In a way he almost becomes part of the episode's problem: he is so good at being charming and funny that we really need Kira to remind the audience what a monster he is, and the script does not fully enable her to do that.

Casey Biggs makes his debut in this episode as the Cardassian officer Damar. He does not get much to do in this first appearance, but he will go on to feature in another 22 episodes of Deep Space Nine and became a fairly significant supporting character during its final seasons.

In the end "Return to Grace" feels just a little bit too dull and unnecessary. A better story could have been told with these characters, and it finishes up with Dukat in a rather unbelievable place - effectively a space pirate fighting Klingons outside the authority of the Cardassian Union. Altogether it's a missed opportunity.

Nine good episodes out of 13 give Season 4 an overall quality ratio of 69 per cent.
Posted by Grant at 11:03 PM