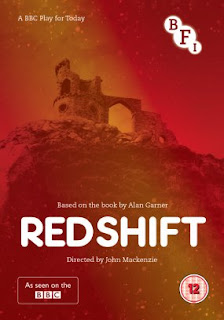 In recent years the British Film Institute (BFI) has been doing a sensational job of restoring and releasing a wide range of old British television productions. It has been a real treat for cult TV enthusiasts, since it has made available a range of productions that many have read or heard about but never previously had the opportunity to see.

Red Shift is a case in point. It is a 1978 film directed by John McKenzie (The Long Good Friday) and adapted by popular fantasy author Alan Garner from his own novel. It follows the experience of three different men living in Cheshire in three different time periods: one in the present-day, one in the English Civil War, and one all the way back in Roman Britain. Their lives are connected by a single Roman axe head, which seems to reside hidden in the area for each man to find, as well as by the ominous Mow Cop hill - and later the ruined folly built upon it.

Alan Garner has drawn extensively on the Cheshire countryside and history throughout his career. It does not simply dominate Red Shift - both novel and film - but also much of his other writing including The Stone Book, Elidor and The Weirdstone of Brisingamen. It's fascinating to see a single writer pretty much dedicate his works almost exclusively to the one region. It adds a great deal to Garner's personal style and tone. Personally I think he is one of fantasy literature's most underrated figures.

There is a remarkable achievement in storytelling at the heart of Red Shift, since the film tells three separate stories that are separated by time, linked by place, but do not directly relate or interact with one another. Special praise is owed to both John McKenzie and editor Oliver White, who cut from one time period to another so smoothly that it feels positively lyrical. Each setting feels textually different as well, becoming more dreamlike and lyrical the further back in time the film goes.

In the present day, Tom (Stephen Petcher) emotionally struggles beneath a puritanical and manipulative mother while attempting to sustain a long-distance relationship with his girlfriend Jan (Lesley Dunlop). It is a slightly challenging storyline, as Tom is not an entirely sympathetic character. At the film's beginning he seems easy with whom to sympathise, but by the film's end it is a much more difficult prospect. Petcher and Dunlop are both superb in their roles.

All the way back in ancient Britain, a band of soldiers have holed up on Mow Cop with a young female prisoner. Macey (Andrew Byatt) is the only one who wants to let the girl go, and his fellow soldiers' refusal to do so leads to unexpected and frightening consequences. Of the three storylines this felt narratively the weakest, and I am not surprised it is also the storyline that the film focuses upon the least. It is not that it is poorly written or directed, simply that it does not leap out and arrest the viewer's attention as the other strands do.

During the English Civil War, a community prepares for the arrival of a group of Royalist soldiers who may kill them all. This sequence, which features Omega Factor star James Hazeldine as one of its key performers, is the bleakest story of the three, and really drives home the brutality and horror of civil war. It works as a striking reminder that the BBC, which is often seen as quite stuffy and proper by TV viewers looking back to the 1970s from today, was often anything but.

The links between the three storylines are, asides from the mysterious axe-head that each man possesses, mostly thematic. Each story focuses on a troubled young man attempting to assert himself, and his difficulties relating to the world around him.

The BFI deserve special praise for their superb restoration job on the film. Despite being shot in 1978 on 16mm film, Red Shift looks and sounds tremendous. The picture quality is clear, and the remastered sound showcases Phil Ryan's progressive rock score wonderfully. You can see the influence this sort of music had on subsequent BBC productions. Within two years Doctor Who for one sounded an awful lot like what Ryan produces here.

As if often the case with the BFI, the DVD has been packed with an unusual assortment of special features. One of them, One Pair of Eyes, is an odd 40-minute documentary about Alan Garner produced in 1972. Another, the 1980 tourist film Spirit of Cheshire, sees actor Michael Hordern narrate the voice of a Silver Ghost Rolls Royce as it travels the Cheshire countryside. I adore this aspect of the BFI: they have so many strange short documentaries and narrative films in their archives that never get seen, so every time they release a film like Red Shift they drop in a few on the most oblique of justifications. It's always a wonderful treat.
Posted by Grant at 9:23 AM